The proposed ban complicates budget negotiations as GOP lawmakers and Democratic Gov. Tom Wolf try to complete the process before the June 30 deadline. 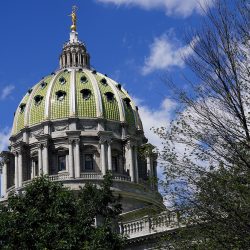 On Monday, the state House voted 108-92 to approve an amendment that would require the schools to swear under oath they do not “engage in research or experimentation using fetal tissue obtained from an elective abortion” to receive state funding.

The move is the culmination of years of pressure from opponents of abortion access, who have argued since at least 2019 that Pitt’s funding should be axed for research conducted using tissue obtained from aborted fetuses.

The vote complicates budget negotiations as GOP lawmakers and Democratic Gov. Tom Wolf try to complete the process before the June 30 deadline.

In recent years, the number of Republican representatives who support blocking Pitt’s funding has steadily increased.

Legislative rules make blocking the funding fairly easy. Two-thirds of lawmakers must agree to fund educational institutions not under the complete control of the state, like Pitt and Penn State. That means the defection of 68 Republican representatives — just over half of the caucus — is enough to prevent Pitt from getting taxpayer dollars.

In May 2021, one anti-abortion activist advised lawmakers at a public hearing to “exercise all of the oversight authority that is available to you” to ensure that “crimes … are not being perpetuated in Pennsylvania by an unaccountable taxpayer-funded abortion industry.”

Under pressure from lawmakers, Pitt hired a law firm to conduct an independent review of its research practices. Released in December 2021, the review found that the 31 studies using fetal tissue since 2001 had all been “conducted in compliance with federal and state laws.”

Those laws, for instance, ban financial compensation for fetal tissue and require researchers to be approved by an internal university board before they begin their research.

Despite the findings, multiple Republican lawmakers, including top leaders, faced political attacks from anti-abortion groups for voting for Pitt’s funding. Some lost their primary this year.

Insiders have noted that multiple factors could be contributing to the opposition to Pitt’s funding, including former university chancellor Mark Nordenberg’s stint as chair of the state’s redistricting commission, which produced a state House map that will likely reduce Republicans’ majority, and an overall distrust of higher education institutions.

But on the floor Monday, state Rep. Jerry Knowles (R., Schuylkill) focused on the tissue research when he offered his rider to the funding bill for the four state-related universities.

He described a 2020 study that involved the grafting of fetal skin onto lab rats to analyze hair growth, before telling lawmakers that a vote for the amendment would be supported by influential groups that oppose abortion access, including the Pennsylvania Family Council and the Pennsylvania Catholic Conference.

“My goal is not to stop the funding,” Knowles said. “As a matter of fact, I want to help Pitt get themselves out of a problem they have created for themselves.”

While the amendment may have won the backing of many state House Republicans, the research ban does not appear to have the same level of support elsewhere in the Capitol as lawmakers try to put the finishing touches on the state’s budget.

In an email, a spokesperson for Senate Majority Leader Kim Ward (R., Westmoreland) said that the chamber needs to review anything that comes from the state House first. But generally, “the Senate does not believe that students and their in-state tuition status should be held hostage to research grants established by” the National Institutes of Health.

“Any such issues can be addressed outside of the budget process,” spokesperson Erica Clayton Wright added.

The spending plan, due under state law by June 30, has been delayed by conflicting priorities between Wolf and legislative Republicans, as well as differences among GOP lawmakers. The exact funding levels for the universities and dozens of other items, from basic education to human services, are still under negotiation.

As of Wednesday, talks were ongoing. Despite pessimism among Capitol sources early Tuesday, Ward said in the afternoon that “we’re getting to a good spot.” More action is expected Wednesday.

Still, the funding for the state-related universities remains a stumbling block.

The bill to approve the universities’ funding — without the research ban — passed the state Senate 44-5 earlier this month, comfortably above the two-thirds margin needed. All the dissenters were Republicans, including GOP gubernatorial candidate and state Sen. Doug Mastriano (R., Franklin).

This year, the state Senate combined funding for the state-related schools into a single bill, rather than the separate bills seen traditionally.

That tactic is commonly used in the legislature to muscle through politically unpopular options — in this case, Pitt’s funding — with less controversial measures. The hope is that the good outweighs the bad, and swings some votes from no to yes.

The state House voted to add the research ban amendment Monday, but the bill awaits a final vote by the chamber. While the amendment only needed a simple majority to be approved, the bill needs two-thirds of lawmakers to back it — meaning Democrats will have to get on board.

At a Tuesday news conference, Democratic legislators from western Pennsylvania said they will not support the legislation.

“I do believe that individuals are entitled to their own views and personal beliefs around abortion,” state Rep. Sara Innamorato (D., Allegheny) said. “What they are not entitled to do is to spread misinformation in the name of them and stop life-saving and life-sustaining research.”