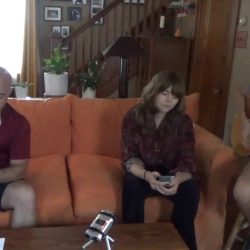 Berks County is no stranger to good music. From the Reading Symphony, to the Berks Jazz Fest, to festivals like West Reading’s Arts on the Avenue, music is easily heard and found in Berks.  An important part of this music scene is the numerous youth programs hosted by the school and county, such as the Reading Symphony’s RSJSO and RSYO, the Jazz Fest’s jams, and, of course, the Reading Musical Foundation.

This appreciation for music that Berks residents have has allowed musicians to easily perform, and at times make a name for themselves.

Two of these musicians are Erich Cawalla, a seasoned musician who has been long making a career out of music, and Emme Ryan (Drago), a newcomer to the Berks music scene, both who graduated from Governor Mifflin. On Monday, July 4, they will be playing in a bit of a homecoming, taking the stage at the opening night of Shillington’s Community Days.

Erich, a multi-instrumentalist (primarily alto saxophone), singer, and band leader of the Uptown Band, grew up in, and started his musical career in Berks County, making it his home for life ever since. He attributes a great deal of his success to his hometown, convinced that he wouldn’t have been as likely to make it if it weren’t for the local musical appreciation. This appreciation has continued even past Erich’s initial professional career with current musicians of the area; one of the county’s youngest rising musicians, singer songwriter Emme, and she’s looking to take a similar path to a music career. Both natives of the area, and Governor Mifflin graduates, Erich and Emme joined me for an interview, speaking about their musical upbringings and everything that Berks County has done for them.

Sitting on my front porch in Shillington, admiring the notes of the birds and a neighbor’s lawn mower, Erich told me stories of the neighborhood (in which he had lived), and by shaggy-dogging into his past, he got to the origin of his saxophone playing.

“I didn’t start playing my instrument until I was going from 8th to 9th grade,” he said, “and I sang in the chorus and all that, but I never really thought it was something I was going to do.”

His parents weren’t the biggest advocates for a future in music, he said, so he decided to get a degree in accounting at Shippensburg University. He began performing semi-professionally with another local musician Bobby Mercer, who had a big band that toured the East Coast.

Erich told the story of how they met.

“I get a call on the line from a guy named Bobby Mercer, and he said,‘Oh you gotta come out and see my band! I saw you perform at the jazz fest.’ It took him three calls but I eventually went. I ran spotlight that night and I only played one song, and from that point forward I started playing music professionally.”

Erich continued to work as an accountant while performing, but he never really saw that going anywhere, especially one day when his company wouldn’t let him leave early for a performance.

“They wouldn’t let me leave. So that Monday I gave my two week notice,” he said. “It wasn’t like I was quitting to quit. I just wanted music to be my life.”

“When I was five the first instrument I picked up was violin,” she said. “I learned fiddle and didn’t play any classical. Instead I learned everything by ear, and I feel like that has really helped me a lot, you know so far as coming up with melodies for songs.”

Her dad, a musician and teacher at Governor Mifflin, influenced her heavily and she “picked up the guitar and started writing songs because of him.”

“I started writing more and more, and I performed in a small act at one of the high school performances. I played an original song in front of an audience for the first time, and that was kinda the moment when I was like ‘I really like doing this, I could do this for the rest of my life.’”

From that point forward, Emme started trying to get gigs in the area and make it as a musician.

Unlike Emme, Erich wasn’t always as sure of himself and a future in music. In fact, he almost quit once, while in high school, discouraged by his initial inability to play. Music didn’t come easy to him, but his band director wouldn’t let him quit, encouraging him to continue playing at Mifflin High School.

“I only had about two months of training. I started marching band over there, but I couldn’t really play my scales, and I couldn’t really do much of anything. I remember the section leader making fun of me. So I was ready to quit. I went down to the band director one day and told him I didn’t want to play anymore, and he wouldn’t let me quit. He told me ‘No, no you can’t quit. You’re going to keep playing,’ and I didn’t quit. He was so quick to turn me down and thank God that I didn’t. It’s the educators’ job to keep us going, and that’s what he did; it’s so important. The Berks music community is really good, we have some really good educators around here.”

Erich also included the Reading Musical Foundation and what it does for the community.

“I’ve been working with RMF for at least fifteen years, and what they do for kids – giving kids scholarships, instruments, and lessons – is all fantastic.”

“I’ve benefited a lot from the resources they give out,” Emme chimed in. “I think it’s awesome. It says a lot about the music community that we have an organization that is so willing to give to kids. Through that, it really helped me find my confidence, especially in my voice because I was able to get vocal lessons. Without them I certainly wouldn’t be as confident.”

Emme has found that she has been encouraged by everyone in the community around her. “The older musicians are so willing to give advice, and they really really pump you up, and really encourage you to keep going,” she said.

Even Erich, sitting right next to her, gave her advice, telling her “Yeah it seems like you’re really doing the right stuff with your songwriting. Make as many collaborations as possible, though, whether it’s with a goofball like me, or someone else. Play as many types of gigs as possible, because it will always help you become a better performer, and the money that comes from it can be invested back into yourself, to make the music that you want to make. Keep investing in yourself.”

Emme embraced the advice, being that she’s only a year into the field, and young.

She said, “I’m just trying to focus on the present, and that’s all stuff I need to be thinking about. Right now I’m not exactly sure what I plan to do going forward. I just know I want to play.”

Erich told her that’s fine, and even shot out some suggestions, but made it clear to continue being herself musically.

I ended by asking them what they would be doing if they weren’t professional musicians, and they both looked at me oddly. It was a hard question for them to answer; they knew this was what they wanted to do. Emme just started it, and Erich has done it for most of his life at this point. But they share the same passion – which was supported by Mifflin’s music program.

“Sometimes I can’t help but write…and yeah I think it would just always be there.”

They don’t need it to just be in the background, though, they’re making it work, following the dream. Erich only recently started putting out his own music, and is now incredibly proud to have released the kind of music that he really wants to play with his newest American Songbook album and Emme almost solely performs her own music. They attribute that creative independence to the encouraging community around them.

“To celebrate the upcoming performance, the three of us covered Hooverphonic’s trip-hop classic ‘Mad About You.’ Listen at the link below.”