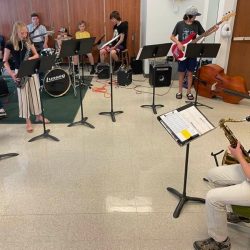 During the week of June 20th, music education organization, Get JazzEd, conducted a jazz camp for 7th through 10th grade Berks County students, who were interested in developing the improvisational skills and musical play that are in the cornerstones of jazz.

The task of learning a new genre, especially jazz, is no easy feat. In fact, it’s a task that will almost always be arduous. The struggles stem from the foreign qualities of the genre, which takes these young musicians out of their element, because the nature of jazz is improvisational play – and that playfulness forces most young musicians out of the habit of reading sheet music and into the craft of listening to one another.

Despite the intimidation that comes from such a change, the students attending the camp did not hesitate. They dove head first into the pool of swung eighths and blues scales that are jazz improvisation, eager to swim deeper.

Mike Eben, host of the camp, understood this intimidation, seeing it in the students, but he also commended their spunk.

“Improvisation is an expression of themselves, something which is completely new, and because of this it can be scary,” he said. “But that’s what the point of the camp is, to get them to try something new, and that’s what they did. This group was really fun, they were truly fearless.” 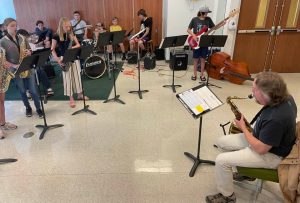 Eben has been working with students for most of his adult life, working as a middle school music instructor at the Muhlenberg School District. A Berks County musician, Eben saw the need to teach students about jazz through the camp because it was rarely being taught in schools. Doing it for the past twenty three years – and recently joined by his daughter Lindsay Evans, a fellow music teacher in Reading – Eben spends five, three-hour days with the camp students, teaching them the basics of jazz rhythm, scales, and improvisation.

Out of all the years Eben has been conducting the camp, he noticed that this one was easily the most outgoing and enthusiastic to learn. He mentioned the group’s almost immediate interconnection, as they quickly made friends with one another, encouraged each other’s playing, and fashioned their own inside jokes.

Towards the end of the week there was even talk of formulating a band between some of the students.

At the end of the week the students hosted a concert for their friends and family, demonstrating what they learned – a twelve-song set – during the intense five days. Members from the rhythm and horn sections switched out between songs and played their first concert without reading sheet music.

Naturally there were a few hiccups. But the students handled them in the spirit of jazz, moving right along with the spontaneity of the music that they were being taught.

Eben remembered one song in particular which got off track, and quickly back on again due to a student’s taking of the reins.

“There was one point when the rhythm section was in completely different parts,” he said. “And this one saxophonist took it upon themselves to get everybody back in line. Everybody stepped up at one point in the day.”

They dug into solos as well, blowing, plucking, and banging away, which Eben was ecstatic about.

“Every student soloed. That’s almost unheard of,” he exclaimed.

While the students’ attitudes were certainly a large factor for their achievements, it would have been nothing without Eben and Evans. Eben spent most of his time with the horn section, playing scales and licks for the students to repeat back to him, so that they would get the phrasing of what a solo should sound like in their heads. Evans, on the other hand, spent most of her time with the rhythm section, specifically the piano players, showing them how to smoothly voice chords for the best possible accompaniment. The students had an incredible amount of information to take in, information which was also dense, and they did so with ease because of the helping hands in front of them. Eben and Evans were always ready to lend advice to a confused student, or encouragement to a shy one, and because of that instruction their students succeeded.

For Evans, part of her instructional strength might lie in her own recent struggles with the style.

“It’s really hard, from personal experience,” Evans said. “I only started playing jazz piano two years ago, and it took me that amount of time to learn how to play by ear. It’s good to have teachers that’ll [teach by ear].”

With that instruction students excelled during the week, and more importantly took steps to securing jazz’s future.

“[The students] are the future of this genre, and we need people to continue this language and music,” Evans said.

They were persistent in their desire to learn, but more importantly they seemed to enjoy it as well. No longer were they dependent on music for them to be able to play, but they began to trust the most important aspect of jazz, and music in general: their ear. Through embracing the improvisational nature of the music the group not only began to learn something new, but began to love it as well.

Sign up for the camp’s second week from July 18-22 at the link below: https://www.eventbrite.com/e/get-jazzed-summer-camps-hosted-by-mike-eben-registration-308677431507.