Interviews with experts and an analysis of data from the Pennsylvania Office of Open Records offer tips for successfully using the state’s Right-to-Know Law. 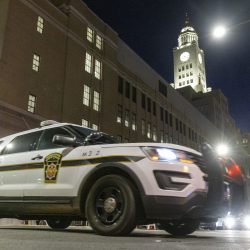 IMAGE: Pennsylvania State Police told Spotlight PA that the number of public records requests filed to the agency has increased every year since 2016, with 1,890 requests filed last year alone.

Disputes over public records reached a record high last year, with the Pennsylvania Office of Open Records reporting 322 appeals involving local and state police departments out of nearly 3,000 for all government agencies.

The Office of Open Records is an independent state agency that oversees and decides on  appeals for public records requests if they are denied by a state or local government. Last year, the third consecutive year cases increased, the office received 2,990 appeal filings.

Liz Wagenseller, only a year and a half into her six-year term as the office’s executive director, said she doesn’t see this “new normal” declining any time soon.

“I think that the public is more engaged,” Wagenseller said. “They’re more enraged, a little bit, and a little less trusting in institutions overall.”

COVID-19 cases, public school funding, and election data are among the most popular topics of public records requests since 2020, Wagenseller said. Law enforcement information has also been a common interest among requesters.

Pennsylvania State Police told Spotlight PA that the number of public records requests filed to the agency has increased every year since 2016, with 1,890 requests filed last year alone.

Almost half of all appeals last year were made by residents, according to the annual report.

Spotlight PA spoke to Wagenseller and other public records experts to outline the best practices for individuals who want to make the most of the Right-to-Know Law to learn about their local and state law enforcement agencies.

The Pennsylvania Right-to-Know Law determines access to public information from state and local government agencies, including law enforcement. A guide by the Reporters Committee for Freedom of the Press breaks down the law in detail.

Although the Right-to-Know Law governs access to most law enforcement records, requests for police video and audio recordings are regulated under another law, Act 22. The 2017 law requires requests for these records be made within 60 days of their creation and include information about the recording and the requester.

What can I request?

Incident reports, criminal records, and crime data are some of the most common records requested from law enforcement agencies, Wagenseller said, but residents can ask for a variety of other documents, from policy and training manuals to past Right-to-Know requests.

Financial reports are the easiest records to get from police departments, said Paula Knudsen Burke, a Pennsylvania-based lawyer for the Reporters Committee for Freedom of the Press.

However, there are a few exemptions — records that agencies are not required to make public — that can make obtaining law enforcement information difficult, Burke said.

Any information related to an investigation is exempt under the Right-to-Know Law, even if the case has been closed or is decades-old, Burke said. In 2014, for example, a Pennsylvania journalist was denied access to records about an unsolved murder at a Penn State University library in 1969.

If the release of a record could threaten public safety or reveal the identity of an undercover officer, it is also exempt. A 2011 appeals case denied a requester access to the Pennsylvania State Police’s policy regarding confidential informants on those very grounds, Burke said.

The Pennsylvania ACLU files dozens of records requests a year as part of its advocacy and investigation efforts, said Jessica Li, who covers criminal justice policy for the organization. Anticipating any exemptions an agency might claim helps her preemptively troubleshoot her request. For instance, while the new Pennsylvania police misconduct database is not public under the Right-to-Know Law, residents can still request hiring reports for officers with histories of serious misconduct.

Even if records are exempt, the Right-to-Know Law states that an agency can “exercise its discretion” and make information public if it is not prohibited under state or federal law. Burke suggests proactively asking an agency to “use their discretion” if the request involves a record that is exempt.

First, ensure the records you’re looking for exist and learn which agency maintains them. Some information might already be available on agency websites.

Many agencies have an open records officer responsible for handling Right-to-Know requests. The OOR website provides the name and contact information of many officers and can be a good starting point.

One easily avoidable mistake Burke and Wagenseller see requesters make is asking a question instead of asking for records. Instead of inquiring how much a police department spent on something and why, for example, Wagenseller said a Right-to-Know request should ask for records on spending.

While a request can seek multiple years of data, Wagenseller said it must be “sufficiently specific.” Include the subject matter, scope, and time frame in the request, if possible. She said requesting “any and all” records on a subject will likely result in a denial, both initially and on appeal.

“You can’t go on a fishing expedition with a net, you have to go with a hook,” Wagenseller said, remembering a saying she’d heard before. “You can’t just ask for everything under the sun.”

Right-to-Know requests can be submitted in person, by mail, or email using a standard form. Make sure to include how you want the records — whether that’s viewing them in person or receiving copies by email or mail — and your preferred file format.

Under the Right-to-Know Law, agencies must respond to a records request within five business days. If they need more time to compile the information, they can request a 30-day extension.

Agencies can deny a request in full or in part, and information can be redacted based on any of the exemptions listed in the law.

If a requester feels a denial or redaction is unjust, they can file an appeal to the OOR within 15 business days.

The OOR’s 2021 annual report shows that of the 2,384 appeals filed against local agencies, 10.5% were against police departments. Appeals involving the State Police and Department of Corrections made up 30.6% of state agency appeals.

Staying organized in the appeals process is important, Wagenseller said. Residents should know the deadlines for filing an appeal before submitting a records request. According to OOR data, about 9% of appeals for law enforcement agency records were dismissed because they were filed too early or too late.

The Pennsylvania ACLU frequently appeals denials of its requests and is often able to negotiate to get the records they want, Li said. She encouraged residents not to be daunted by the appeals process, which is free and does not require an attorney.

To learn more about the Right-to-Know Law and public records requests, Wagenseller suggests perusing the OOR’s online docket search. Looking at outcomes of other cases can help you understand which requests are granted, she said.

While OOR staff can give tips or answer general questions about the Right-to-Know Law, they cannot provide legal advice like how to phrase a request and whether they think it will be granted.

The Pennsylvania ACLU also explains the Right-to-Know Law on its website. It recently hosted a workshop on the law in conjunction with the OOR and will hold more in the future if public demand grows, Li said.