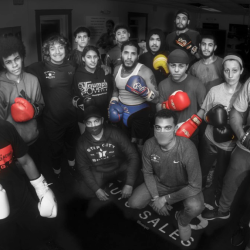 “Stories from Star City Boxing” to be given away during the Peace & Gloves event, Aug. 13

What happens when students in the Penn State Berks ‘Storytelling for Social Justice’ course team up with Star City Boxing, a nonprofit community boxing and fitness program located in the City of Reading? The result is a published book titled “Stories from Star City Boxing,” a companion website, and two videos that tell the stories of the impact the organization has made on youth in the Greater Reading area.

Seven Penn State Berks students and their professor, Dr. Laurie Grobman, worked with members of the nonprofit to tell impactful real-life stories. Grobman designed the course around the concept of ‘counter story’ to challenge dominant narratives and reveal stories of people and groups that are rarely told publicly and generally misunderstood.

Star City Boxing has served hundreds of youth, as well as adults, since opening its doors five years ago. The nonprofit promotes and teaches the importance of family, discipline, self-respect, confidence and making a positive impact – both in the gym and in the community.

“Our hope is that the counter stories in this book offer meaningful narratives about Reading and the people who live in the city,” explains Grobman, distinguished professor of English and women’s studies at Penn State Berks.

The stories were previously shared at two events as part of the Berks4Peace National Youth Violence Prevention Week, April 25-30, 2022: one at Star City Boxing, and the other at the ‘Breaking Barriers, Building Bridges’ community event at Penn State Berks.

According to Grobman, student writers Adam Chaffe, Giovanna DeLima, Joseph Fromuth, Troi Howell, Ja’nique Jules, Nicholas Kopp, and Elijah Schade approached the project with open-minded enthusiasm. They also had an opportunity to step outside their comfort zone by interviewing people who they never met before and working with these people to co-tell, in writing, their stories.

The book was edited and designed by Joseph Fromuth, one of the student writers who continued his work on the project as an editorial intern in summer 2022. Fromuth also designed and published the “Stories from Star City Boxing” website.

The project was supported by the Dr. Ruth M. Freyberger Endowment for the Arts and Art Education at Penn State Berks. Photography was provided by Annabelle Bowers.

Up to 200 books will be distributed at the Peace & Gloves Block Party, which will include an amateur boxing show, car exhibit, food vendors and entertainment. The event is sponsored by Star City Boxing and will be held on Penn Street (between 5th and 6th streets) in downtown Reading on August 13, beginning at 1 p.m. with the first boxing match starting at 3:30 p.m.