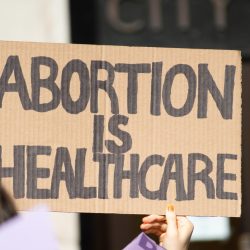 In about a month, the Pennsylvania General Assembly revisits a controversial proposal with five separate amendments to the state Constitution. Groups that oppose Senate Bill 106 are using the next few weeks to rally their forces.

SB 106 could deny the right to abortion care and funding in Pennsylvania without exception. Another potential amendment would tighten rules about voter ID at the ballot box.

Laura Nevitt – executive director of the Keystone Progress Education Fund – said in the meantime, groups like hers are reaching out to voice concerns about SB 106, particularly the prospect of an abortion ban.

“The work now is just about educating people about what this constitutional amendment actually would do,” said Nevitt, “why it is not good for the people who live in Pennsylvania, and making every effort and attempt possible to prevent it from getting on the ballot.”

Democrats say GOP lawmakers are using the constitutional amendment process because they know the governor would veto standard legislation about these issues.

But this method also means the resolution has to survive two legislative sessions before the amendments could be put on the ballot for a public vote. The second session begins September 12.

The Pennsylvania Coalition Against Rape also strongly opposes SB 106 and predicts if it’s passed, it would be used to block individuals’ access to abortions, even in cases of rape or incest.

Donna Greco – public policy and legislative affairs director for the coalition – said their view is that it violates bodily autonomy and reproductive freedom. But for now, she said, a person still has the right to get an abortion.

“Currently, abortion is still legal and protected in Pennsylvania,” said Greco, “as well as the range of reproductive healthcare, contraception, emergency contraception. So right now, those services are still legal here throughout the Commonwealth.”

Gov. Tom Wolf already filed a lawsuit to protect reproductive rights in the Commonwealth. He contends the amendments are “constitutionally invalid.”

The Senate Republican Caucus countered that Pennsylvania voters should be allowed to decide these issues.