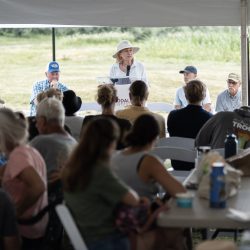 State Senator Judy Schwank, who serves as the Democratic chairman of the Senate Agriculture and Rural Affairs Committee, presented the grant award during a press conference at the Institute’s annual Organic Field Day on July 22, 2022. The event saw more than 400 people from 20 states and six countries visit the Institute’s 386-acre property to learn about research and innovations in regenerative organic farming practices.

“Having a world-renowned educational leader right here in Berks County brings an immense sense of pride to our community,” said Schwank. “The new state-of-the-art facility that will be established here will allow Rodale to continue impacting the worldwide push to adopt regenerative agricultural systems in addition to impacting local supply of organic healthy food.”

The $3 million grant is funded by the commonwealth’s Redevelopment Assistance Capital Program. This investment will support Rodale Institute’s rigorous scientific research that builds a healthier and regenerative food system, mitigates the effects of climate change, and works to heal people and the planet.

At the press conference, Rodale Institute’s Chief Executive Officer Jeff Moyer spoke about the organization’s recent growth and highlighted the fact that the Institute now has nine research locations across the globe. Moyer also talked about the launch of the Regenerative Organic Certified (ROC) seal, which the Institute created in partnership with several major brands including Dr. Bronner’s and Patagonia.

“More people than ever are interested in organic food, but they want to know that there’s a social justice component to the way food is being produced—that people who are growing that food are treated fairly, that animal welfare is a priority, and of course, consumers want to know that in the process of producing organic food, we are managing our soils in a way that regenerates them and makes them healthier for future generations,” said Moyer.

“I could not be prouder of the partnership we’ve developed over the last few years to help farmers begin to transition some or all of their farm operations to organic—to get free technical assistance from the Rodale Institute with their now 75 years of expertise,” said Cook. “The help is there, and it’s available to you through Rodale Institute.”

Also present at the press conference was Scott Sechler Sr., owner of Bell & Evans and a titan in the organic poultry industry. Sechler spoke about his company’s commitment to organic agriculture and its work with Rodale Institute.

“Bell & Evans is very committed to helping Rodale Institute grow and continue to do their good work,” said Sechler. “Together, we can make a difference in our soils and our climates. We just have to keep working hard, and we’ll get there.”

Rodale Institute will celebrate its 75th anniversary this October.