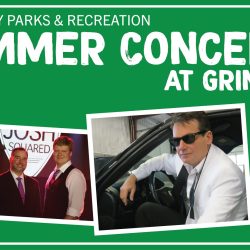 Enjoy the natural beauty of our parks while enjoying live music during our third installment of the Berks County Parks and Recreation FREE Summer Concert Series on Sunday, August 14! Each concert throughout the summer will include three musical acts at Gring’s Mill Amphitheater, free parking and on-site food trucks – the perfect recipe for a summer day out with the family!

From 3-5 | Josh Squared
Josh Squared features two (you guessed it!) JOSHES! With the ability to play music from The Doobie Brothers to Robin Thicke and Frankie Valli to Bruno Mars, they are quickly becoming widely known on the private party circuit for the ability to get the crowd on its feet.

From 5-7 | Rick K. Road Trip
Performing an exciting and unique blend of high energy rock n’ roll from the 1960s through today, Rick K. brings professionalism and class to every event. From Motown to KC & The Sunshine Band, Eagles to Rolling Stones, Prince to Bruno Mars, this is a rock n’ roll review comparable to anything you’ll see in Branson, Atlantic City or Las Vegas.

Our last summer concert will be Friday, August 26 featuring, Fooling Ourselves: A Tribute to Styx.

Gring’s Mill is located at 2083 Tulpehocken Road, Wyomissing PA, 19610. These programs are presented by the Berks County Parks & Recreation Department. For more information, call 610-374-2944, visit www.countyofberks.com/parks or find us on Facebook, @berkscountyparks.