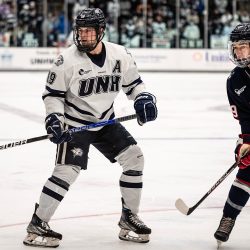 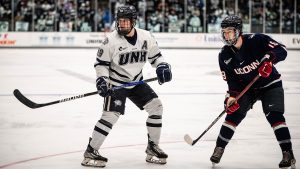 Eric MacAdams (left) skating for the Univ. of New Hampshire (2022)

The Reading Royals, proud ECHL affiliate of the Philadelphia Flyers and Lehigh Valley Phantoms, announced one signing this past week to the team for the 2022-23 season.

Eric MacAdams was the lone player signed to next season’s roster this week which was officially announced on Thursday, August 11.

MacAdams, 25, is a 5’11” forward joining the Royals’ roster after skating in two games for the Adirondack Thunder last season. The Salem, MA native made his professional debut with the Thunder on March 19, 2022 and earned an assist for the first point of his professional career in Adirondack’s win against Reading, 3-2.

“We’re excited to have Eric be a part of the Royals this year,” said Coach Henry. “Eric’s work ethic and energy will be a great addition to our group. Being able to get experience within our league at the end of the 2021-22 season should give him a better understanding of what to expect this year.”

Prior to the ECHL, MacAdams played five seasons at the University of New Hampshire in the NCAA Division I. Across his collegiate career, MacAdams totaled 50 points (20 G, 30 A) and served as the Wildcats’ Alternate Captain in the 2020-21 and 2021-22 seasons.

At the University of New Hampshire, MacAdams earned the University’s Service Credit Union Student-Spotlight Athlete Award as well as the team’s Robert A. Kullen Unsung Player Award in his 2019-20 season. MacAdams followed up the accolades with two more the following season. In his 2020-21 season, MacAdams earned a Hockey East All-Academic Team selection as well as the Wildcats’ Robert A. Kullen Unsung Player Award for a second straight year.

Through four seasons at the University of New Hampshire, MacAdams played with Royals’ 2021-22 defenseman, Will MacKinnon (2018-22).

MacAdams played three seasons in the United States Hockey League (USHL) before playing in the NCAA. He was drafted 316th overall in the 2015 USHL Entry Draft by Sioux Falls and played for the Stampede for the 2015-16 and part of the 2016-17 season. MacAdams concluded the 2016-17 season with the Dubuque Fighting Saints where he totaled five points (2 G, 3 A) across 11 regular season games and two points (1 G, 1 A) in eight playoff games. Across his USHL career, MacAdams scored 23 goals and 20 assists for 43 points in 105 games.