Pa. lawmakers are set to get huge raises next year. They can return them, but almost nobody does.

by Stephen Caruso of Spotlight PA 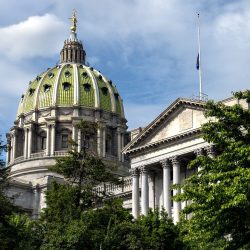 Inflation is pushing the Pa. legislature’s annual cost-of-living adjustments even higher, with base salaries expected to exceed $100,000 in 2023.


Spotlight PA is an independent, nonpartisan newsroom powered by The Philadelphia Inquirer in partnership with PennLive/The Patriot-News, TribLIVE/Pittsburgh Tribune-Review, and WITF Public Media. Sign up for our free newsletters.

HARRISBURG — Fiscal responsibility is an axiom in Harrisburg, but nearly none of Pennsylvania’s 253 state lawmakers seem to mind when their own salaries swell spending.

State House and Senate lawmakers receive an annual cost-of-living adjustment (COLA) to their salaries under a 1995 law meant to shield them from political blowback for voting for their own pay increases.

The automatic raises vary each year, but typically represent a 1% to 3% bump in pay. The salary hike was temporarily suspended in 2020 because of the COVID-19 pandemic, but raises resumed the following year — boosted by high inflation.


At the moment, the base pay for state legislators in both chambers is $95,432. That number could push past $100,000 next year, according to an analysis by The Caucus/LNP, adding to the price tag for Pennsylvania’s already expensive, full-time legislature.

Lawmakers can return the increase to the state treasurer, but records obtained by Spotlight PA show very few do.

(Other lawmakers may donate their pay bump to charity, The Caucus/LNP reported, but it is difficult to independently verify who does and does not without access to private financial documents.)

Kim has given back the most, amounting to almost $37,000 in salary since she was first elected in 2012. That’s all the money she’s received in pay increases since she joined the legislature, according to The Caucus/LNP.

She told Spotlight PA that giving back the pay raise is her attempt to stay true to her initial run for office as a self-described reformer, one she’s tried to follow “no matter how challenging it would be.”

Kim is also the face of legislative Democrats’ push to raise the state minimum wage from the federal floor of $7.25 an hour to $15. Her proposal would tie annual increases to inflation.

“I can’t in good faith accept COLAs when I am fighting for a minimum wage,” Kim said. “In addition to my promise, I’m still fighting to make sure that minimum-wage increases with the [consumer price index] just like lawmakers get.”

State Rep. Brad Roae (R., Crawford) paid $3,200 back to the state between 2011 and 2016 but hasn’t returned any payments since then. He called returning the money a “complicated and time-consuming” process.

“Taxes must still be paid on the money and it still counts as income as far as SERS pensions, your kids qualifying for student grants, student loans, and scholarships, as well as the hassle involved of writing a check each month to Treasury,” he wrote in a November 2021 memo to his fellow legislators.

He offered a compromise bill that would allow lawmakers to opt out of the pay raise each year through a form. The proposal has not been considered by the state House.

Legislation that would suspend the COLA in 2022 received unanimous, bipartisan support in a state House committee last year but was never considered by the full chamber. In the state Senate, a bill that would completely eliminate the annual pay raise — introduced by State Sen. Doug Mastriano (R., Franklin), the Republican gubernatorial nominee — has been stuck in committee since January.

WHILE YOU’RE HERE … If you learned something from this story, pay it forward and become a member of Spotlight PA so someone else can in the future at spotlightpa.org/donate. Spotlight PA is funded by foundations and readers like you who are committed to accountability journalism that gets results.