Thousands of Pa. nursing home workers may strike despite $600M for care in state budget

Workers for two for-profit companies fear the bulk of the money won’t be used to alleviate longer working hours, expanded job responsibilities, and even food rationing for residents. 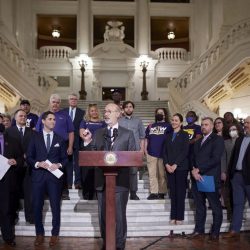 HARRISBURG — Months after the state approved hundreds of millions of taxpayer dollars to bolster caregiving in nursing homes, thousands of nurses, health aides, and other support staff may soon go on strike over how two for-profit companies plan to use the money.

At issue is how much of the $600 million earmarked by Gov. Tom Wolf and the legislature will actually go to workers who say they are working longer hours, taking duties outside their jobs, and even rationing food for residents.

The plan directed $250 million in one-time payments to long-term care providers with no requirements on how the money is spent. Facilities have used similar payments on COVID-19 costs like testing and PPE as well as for one-time recruitment or retention bonuses to workers.


The remaining funds represent a permanent increase in state funding to pay for low-income residents’ stay in care facilities, with a new requirement that 70% of all costs go to “resident-related care” — though exactly what that encompasses is unclear.

It is demanding that the increased funding be spent on higher wages and better benefits for nursing home workers to stem turnover. The union is also asking for language that protects workers’ next contract in case a home is sold, transparency in how the homes use outside contractors, and a guarantee that companies won’t fight future union drives.

The union reached an agreement with one employer, Guardian Healthcare, earlier this week, though the final contract had yet to be ratified by workers as of Aug. 31. Negotiations are still ongoing with two more nursing home companies, Comprehensive and Priority.

Barring an agreement, workers at 14 homes are set to go on strike Sept. 2. Workers at another four would join them on the picket line Sept. 9.

“We’re putting everything in this company. They benefited. Why aren’t they willing to even sit at the table with us and hear us out?” union member Simone Whyte, an LPN at a Dauphin County facility, said at a recent news conference. “If they just humble themselves one minute and just listen, maybe something can come out of this.”

In a statement, facility managers at eight Comprehensive-owned homes in western Pennsylvania said that there had been “great progress” in negotiations so far, but more talks were needed to reach a final deal.

“In our recent negotiation sessions, we have made a number of substantial offers, including proposals that will see every employee receive another considerable wage increase this year and each year thereafter as well as enhanced health care benefits, and more,” the managers said.

However, the facilities also have “contingency plans in place to ensure we avoid any disruption in care to our residents.” A spokesperson declined to answer specific questions about those plans or the use of state funding.

The new $600 million isn’t coming all at once. First, sometime this fall, long-term care providers such as nursing homes will receive $250 million in federal stimulus money.

Then, starting in January 2023, providers will see an approximately $35-per-day increase in the state reimbursement rate for taking care of low-income residents — a 17.5% bump. Facilities will be required to show that 70% of their total costs are resident-related, rather than for overhead or administration.

But exactly what resident-related costs are is not defined in the legislation, said Diane Menio, executive director of CARIE, a Philadelphia-based nonprofit that advocates for the well-being and autonomy of older adults.

She also noted that the Wolf administration backed off a proposed regulation that would have required nursing homes to provide residents with 4.1 hours of direct care each day — the federal recommendation — instead agreeing to boost the current requirement from 2.7 hours to 2.87, along with new minimum ratios of nurses and nursing aides to residents.

Zach Shamberg, chief executive of the Pennsylvania Health Care Association, said that the funding boost should help counteract years of low state spending on elder care and bring security to the industry amid the COVID-19 pandemic. His trade group for long-term care facilities counts Priority as a member.

But if all the union’s demands were met, Shamberg said, nursing homes would need an additional $35 a day from the state to meet the additional costs.

Even without a requirement for higher staffing levels, research suggests the reimbursement rate bump will increase the quality of care. A National Bureau of Economic Research working paper based on Pennsylvania data estimated that a 10% rate bump would “increase the number of skilled nurses per resident by 8.8%.”

Menio agreed that the rate should be increased, but a bump should be paired with transparency around how homes spend those dollars.

Private investors have been buying up nursing homes, Menio said, and then hiring outside agencies to staff and provide key services such as food and laundry. Sometimes, the investors may even have a stake in the contracted agencies.

Such a setup, Menio said, allows private companies to use nursing home funding as a “piggy bank.” Transparency, as the union has asked for, could help counter this tendency.


“Wouldn’t it be better to raise the salaries of the people who work there and are committed to the work than to be spending them on agency staff?” Menio said.

The contract dispute has drawn the attention of Harrisburg policymakers. A spokesperson for Wolf, the Democratic governor, said in a statement the looming strike was an “unfortunate and completely avoidable situation.”

The state’s increase in long-term care spending “came with bipartisan support and was celebrated by both industry and the workforce,” Wolf spokesperson Elizabeth Rementer said.

“Now, less than 60 days after the governor’s signature on this historic legislation, we’re hearing of select nursing home operators who are refusing to commit to the types of investments this funding was intended to support.”