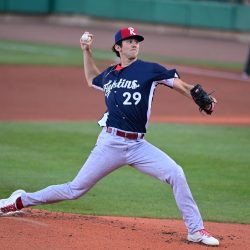 The Reading Fightin Phils are excited to announce that right-handed starter Andrew Painter has been named the Philadelphia Phillies Paul Owens Award winner. This honor is given to one position player and one pitcher who have led the farm system throughout the season.

Andrew Painter, 19, is Philadelphia’s #1 prospect in their minor league rankings. He will receive the Phillies MiLB Pitcher of the Year award alongside Darick Hall who is to be named their Player of the Year.

Painter split time between three farm system levels, including finishing out the summer in Double-A Reading. Cumulatively, he threw 103.2 innings of work for a 1.56 ERA with 155 strikeouts. Painter, who leads all Phillies minor league pitchers in strikeouts this year, averaged 13.46 strikeouts per 9.0 innings and had a 38.7 percent strikeout rate compared to a 6.2 percent walk rate. He walked just 25 batters this summer. The righty allowed just 18 earned runs all season long and a mere five homers to his opponents, who could only hit for a .181 average off of him.

The righthander made nine starts with single-A Clearwater. In one outing he struck out a career-high 14 batters of the total 16 that he faced. He blazed through with a 1.40 ERA in 38.2 IP. That’s just six earned runs allowed. He struck out 69 total batters there.

Then he was promoted to high-A Jersey Shore on June 26, where he made another eight starts. He continued to amaze, getting even better at a higher level. Painter tossed 36.2 frames for a 0.98 ERA. He allowed just four earned runs and seven walks to his 49 strikeouts.

After being called up to Baseballtown on August 21, Painter commanded five starts for 28.1 innings pitched and a 2.54 ERA. He walked just two batters to his 37 strikeouts, an impressive count for one of the youngest players at that level.

In his 22 starts overall, he tossed at least 6.0 innings eight times, including in each of his first three outings with Reading. Seven innings (three times) and 93 pitches represent his longest efforts. Painter recorded six wins and two losses. He picked off five runners and made just one error all season long. Painter was named the Phillies Minor League pitcher of the month in July.

The Pompano Beach, FL native was named the No. 25 prospect in all of baseball by MLB.com. Painter was selected by the Phillies in the first round (No. 13 overall) of the 2021 MLB Draft out of Calvary Christian High School.

Painter threw just six professional innings of work in 2021. He did not allow a run or a walk, giving up just four hits. He struck out 12.

Preston Mattingly, Phillies director of player development noted: “Andrew has had a special year all around. From the moment he reported to camp, he showed the type of competitor he is and how hard he works. He carried that throughout the season. Obviously, we are proud of Andrew’s numbers, which speak for themselves, but we are also proud of the way he has matured as a person.”

The Paul Owens Award was instituted in 1986 and is named for the late Paul Owens, who spent 48 years in the Phillies organization as a scout, farm director, general manager, manager and senior advisor. Many R-Phils have received this award and gone on to have much success in Philadelphia. The last Baseballtown player to be named the Paul Owens Award winner was Bryson Stott in 2021. Pat Burrell, Ryan Howard, and Rhys Hoskins are notable players to top the Phillies Minor League system.

The 2022 Paul Owens Player of the Year is Darick Hall who spent the majority of the season with the Triple-A Lehigh Valley Iron Pigs. He led the team with 26 homers and 83 RBIs. Hall contributed exponentially for the Philadelphia Phillies as well, making his Major League debut on June 29, 2022. His first three big league hits were home runs. The players will receive their awards on the field on Thursday, Sept. 22, prior to the Phillies’ 7:15 p.m. game against the Atlanta Braves.