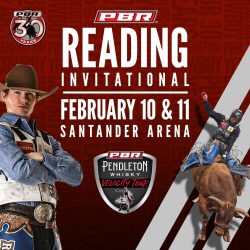 For two nights, some of the best bull riders in the world will battle the sport’s rankest bovine athletes in the ultimate showdown of man vs. beast in one of the most exciting live sporting events to witness.

The Velocity Tour returns to Reading after a 12-year hiatus.

The bull riding action for the 2023 PBR Reading Rumble begins at 8 p.m. ET on Friday, Feb. 10 at Santander Arena.

On Friday evening in Round 1, all 40 competing riders will attempt one bull each.

Following the opening round, the Top 10 will then advance to the championship round on Saturday, Feb. 11 at 7 p.m., where they will attempt one final bull, all in an effort to be crowned the event champion.

Tickets for the two-day event go on sale Tuesday, Sept. 27 at 10 a.m. ET and start at $15, taxes and fees not included. Tickets can be purchased online at Ticketmaster.com and PBR.com, at the Santander Arena or by calling PBR customer service at 1-800-732-1727.

Want to see the toughest sport on dirt up-close and personal?

PBR Plus Seats are available for avid fans who want an exclusive VIP experience while enjoying the world’s top bull riding circuit. These tickets offer great lower-level seats close to the action, a personal on-site concierge at the PBR fan loyalty booth, a commemorative credential & lanyard, and a post-show photo experience on the dirt.

For an enhanced PBR experience, fans can purchase the PBR VIP Elite Seat. In addition to the Plus Seat package, this option includes a $10 concession voucher per seat and a pre-show backstage tour with PBR talent.

To receive the fully immersed experience that PBR fans do not want to miss, PBR Premier Elite Seats are also available for purchase. In addition to the VIP Elite Seat package, this exclusive seat includes the best seat closest to the bull-riding action and a limited edition PBR 30th Anniversary Season hat.

For more information on PBR Premium Experiences or to purchase Elite Seats for the PBR Reading Rumble in Reading, Pennsylvania, visit https://pbr.com/tickets/premium-experiences/.