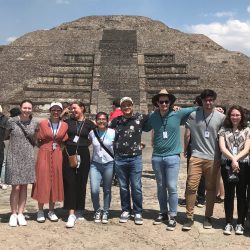 A new book written by Penn State Berks Professor of Latin American Studies Kirwin Shaffer explores how historical forces, people, and ideas traveled across political borders and bodies of water to shape Caribbean history. Titled A Transnational History of the Modern Caribbean: Popular Resistance across Borders, the book discusses many of the same issues that are timely today, including same-sex marriage and LGBTQ+ rights.

Published by Palgrave Macmillan, A Transnational History of the Modern Caribbean focuses on how average people resisted political, economic, social, and racial control, and how this resistance sometimes originated from abroad and other times was taken abroad to inspire others to resist exploitation and secure their freedoms.

Although written from a historical perspective, the issues continue to take center stage in world affairs today.

“There’s a lot going on in the Caribbean right now,” Shaffer explains. “Cuba got hit by Hurricane Ian and they are appealing to the United States for relief funding. This is happening just on the heels of the country legalizing same-sex marriage and allowing same-sex couples to adopt. In fact, most Latin American countries are expanding LGBTQ+ rights, including same-sex marriage, despite objections from the Catholic Church. Simultaneously, activists promoting anti-femicide, anti-harassment, and pro-access to legal abortion measures have come together in a social movement – referred to as the ‘Green Wave’ – and united across political borders.” It’s an interesting shift.”

A Transnational History of the Modern Caribbean examines Caribbean people resisting racial, political, and social oppression from the eve of the 1790s Haitian Revolution to the twenty-first century.

“Haiti was hit by a massive earthquake in 2010 that devastated the island. When the government didn’t step in, people started to do things on their own. They were fighting violence outside the purview of the government, and even building new cities.” He goes on to explain, “Many thought it would be an opportunity for the country to ‘start over’ but instead street gangs are pretty much running the country today.”

“Migrating rebels, shipments of newspapers, rumors, and acts of resistance themselves inspired people throughout the Caribbean, who launched their own acts of defiance, illustrating the transnational nature of Caribbean resistance.

“Some people fought to be left alone, ungovernable, and masterless. Other people fought to free their ethnicity or race, their class, or their nation. Men and women employed a range of tactics from violent armed uprisings to fleeing repression and starting their own communities.

“Through song, language, religion, and festivals, they maintained cultures and identities against oppressive norms that devalued or sought to destroy those cultures and identities. People declared strikes and riots against economic oppression. Women and mothers mobilized for their and their children’s freedoms. Across the Caribbean, people confronted oppression and in so doing illustrated their humanity and agency.”

Shaffer became interested in Latin American and Caribbean history in 1979 when he was 14. He was a rebellious teenager and he started reading more of the newspaper than the sports section. “I became fascinated with international news and the opinion page. At that time, there was a lot going on, from the revolutions in Grenada and Nicaragua, to the civil war in El Salvador.”

He made his first trip abroad to Cuba as a graduate student at the University of Kansas. He remembers it being massively different from anything he had ever seen with Socialist billboards and rhetoric everywhere.

“It was right at the end of the Cold War, and our group was staying at a guest house run by the government. Hungarian and East German officers and their wives were also staying there. One night, they began singing their respective national anthems and our group began singing The Battle Hymn of the Republic. Soon the others joined in singing Solidarity Forever, an adaptation written in 1915 as a rallying cry against titans of industry, which later became a Communist anthem.

In addition to visiting Cuba as a student, Shaffer studied at the University of the West Indies in Jamaica, taking courses on Caribbean History and Reggae & Rastafarianism in Jamaican Culture. During his time in Jamaica, he interviewed Rita Marley, wife of the late Bob Marley.

“Ever since my first year in college, I knew I wanted to be a teacher,” Shaffer comments. “Students need to understand that in the modern world, it doesn’t make sense to study just one country’s politics and history; you have to study many countries and their relationships to one another.”

Shaffer includes embedded study abroad courses in his curriculum. Most recently, he took a group of students to Mexico City. “It’s one of the world’s great cities. It’s a historically important place to be an archaeological tourist.”

In addition to his teaching schedule, Shaffer conducts research on how Latin American countries interact with each other and how that translates into resistance to exploitation.

“There’s a long history of people cooperating to fight oppression,” he explains. “One way people fight oppression is “through migration and sharing ideas, news, money, and organizing.”

When he asks his students where Latin America is located, they generally say south of the United States. Then he asks them to consider the U.S.’s southwest states – many were once part of Mexico and are a popular entry point for Latin American migrants. Then he asks them to consider Florida, which was discovered by Spanish explorers and is another popular port of entry. In fact, Shaffer would argue that Reading, Pennsylvania, with a population that is 80 percent Latino/a, is Latin “American thanks to the transnational migration of peoples and cultures.”