The Democratic takeover of the Pa. House will be a little messy to start. Here’s why.

When the Pennsylvania House’s new session begins on Jan. 3, at least one Democratic seat will be vacant — complicating the election of the chamber’s speaker. 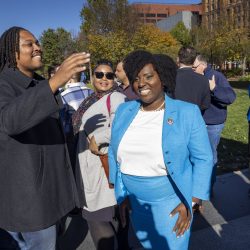 HARRISBURG — The Democrats have won control of the Pennsylvania House, but the party will need to rely on Republican support in the early months of 2023 to secure the top spot in the chamber.

The party won 102 seats during the Nov. 8 midterm election, giving them control of the 203-member chamber for the first time in more than a decade.

But when the new session begins on Jan. 3, at least one Democratic seat will be vacant.


State Rep. Tony DeLuca (D., Allegheny), the longest-serving member of the chamber, died in late October — too late to take his name off the ballot — but still won reelection. State Rep. Summer Lee (D., Allegheny), meanwhile, won a seat in Congress and will be sworn in on Jan. 3.

Both of those seats, as well as a third that will be vacated in mid-January by state Rep. Austin Davis (D., Allegheny), will be filled in special elections, which could take place between February and May. All three seats are considered safe for Democrats to win.

In the meantime, the state House will need a speaker to preside over the chamber.

The position is an important one. The speaker represents the entire chamber, calling up bills for a vote and moderating floor debate. They also pick the state House’s powerful committee chairs, who often decide whether a bill advances or withers.

But a lawmaker must win a majority to be elected to that position, meaning Democrats will need support from at least one legislator from outside of their party.

If McClinton wins, she’ll be the first woman and second Black person to hold the position (former state Rep. K. Leroy Irvis of Allegheny County was the first).

A spokesperson for Lee said she was still evaluating her options.

Even if Lee is able to attend the Jan. 3 session in Harrisburg, Democrats will still need one Republican to back McClinton.

Capitol sources said it’s possible McClinton could win the support of at least one suburban Republican who lives in a Democratic-heavy district and narrowly survived the Nov. 8 election. The party may also try to offer concessions to a group of GOP lawmakers in exchange for their support.

Yet another option: selecting a Republican lawmaker to serve as speaker for the entire session or until the special elections restore the Democrats’ majority.

In the event of a tie on Jan. 3, it’s unclear what would happen next. One state House source called that “an unprecedented situation.”

Without the speakership, the GOP leadership team will have one less position to fill, meaning one lawmaker will lose a coveted spot in the caucus. This will kickstart a high-stakes game of musical chairs, and potentially line up current Speaker Bryan Cutler (R., Lancaster) and House Majority Leader Kerry Benninghoff (R., Centre) to fight over who will lead the caucus in the next term.

Should Republicans come to the chamber on Jan. 3 with a one-vote advantage, some GOP rank-and-file members indicated to Spotlight PA they would be in favor of electing a speaker from their own party — even though the party’s majority would be wiped away by special elections.

With so much at stake for both parties, “everyone is walking on eggshells to see how scorched earth they want to go,” said one Republican consultant, who asked for anonymity to describe the delicate situation.

Most Capitol insiders agreed that the two-year session coming to an end was unproductive, as outgoing Democratic Gov. Tom Wolf and the legislature sparred over the legacy of his COVID-19 response and whiffed on meaningful changes to election law, instead falling back on naming bridges.

A closely divided General Assembly could yield another session of gridlock.

A single-vote majority, many longtime Capitol hands noted, gives leverage to any one lawmaker to change the outcome of a vote in return for a pet priority.

In particular, multiple people said they were on the lookout for a Democratic lawmaker who would emulate U.S. Sen. Joe Manchin (D., W.V.), who has often cast the deciding vote in an evenly split U.S. Senate.

But “as long as we achieve the bottom line — which is for the betterment of 203 districts and collectively, the whole state — there’s nothing wrong with that,” said retiring state Rep. David Millard (R., Columbia), who has been in office since 2004.


Others agreed. One lobbyist joked that the close margin will require state House Democrats and Republicans to “look each other deeply in the eyes” and find a reason to like each other in order to get anything done.

Going forward, state Rep. Tom Mehaffie (R., Dauphin), a moderate from suburban Harrisburg, said it was time for lawmakers to go back to basics and focus on using committees to workshop bills.

While he declined to name specific proposals, the last few years resulted in “a lot of bad products in the House,” he said.

By instead getting input from both parties and from impacted groups, he said, the chamber could produce bills that address significant and bipartisan issues such as recruiting more people to become nurses, cops, and teachers.