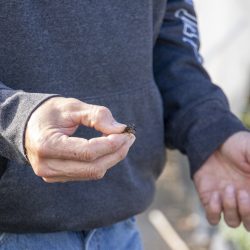 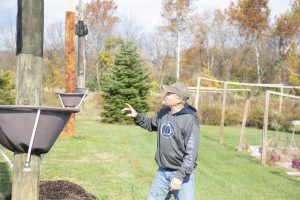 John Rost, a research technologist at Penn State Berks, explains the spotted lanternfly research that is being conducted at the Penn State Berks Center for the Agricultural Sciences and a Sustainable Environment (CASSE). Credit: Samantha Bower

The Penn State Berks Center for the Agricultural Sciences and a Sustainable Environment (CASSE) is studying the role that telephone poles can play in monitoring and eradicating the invasive spotted lanternfly.

The CASSE continues to be one of the main research sites surveying effective procedures in the control of the invasive planthoppers through support from both the U.S. and Pennsylvania departments of agriculture, as well as other grant funding.

Spotted lanternflies are drawn to tall objects like skyscrapers, gas pumps, pillars and trees, according to John Rost, a research technologist in the horticulture department at Penn State Berks. The lanternflies use these perches to gain their bearings before searching for a place to feed.

At the CASSE, telephone poles were used as monitoring devices to test methods of eradication. In the study, eight poles were set up in a straight line to keep a replication. Two types of traps were installed on each pole: a top trap with a sealed barrier except for an opening at the bottom and a section of pole wrapped with pesticide-impregnated netting, which the insects encountered on their journey to the top. At the bottom of the pole there is a catch trap to collect any dead, falling lanternflies.

Four of the poles were outfitted with white netting, like the type that is used in tobacco houses, while the other four had black netting, which is typically used for mosquitoes, explained the researchers.

Rost explained that insects latch on to the poles, and then climb to the top where they encounter the top trap covered with netting, which exposes them to an insecticide.

“We’re trying to see if height matters, so we have two poles [outfitted with traps with each type of netting] at mid-height and we have the other two at the top,” Rost said. “We’re finding that we lose fewer lanternflies in the drop-down at mid-height because they have a shorter drop.” He said that lanternflies that die on the top poles tend to get carried away by the wind. 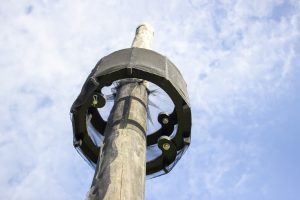 Each telephone pole had a top trap with a sealed barrier except for an opening at the bottom. Half had white netting, like the type that is used in tobacco houses, and half had black, which is typically used for mosquitoes. Credit: Samantha Bower

According to Rost, the researchers have noticed a difference in the effectiveness between the two trap materials. The mosquito netting was more effective in eradicating the lanternflies, causing them to die and fall within a couple of minutes. The tobacco netting required a longer contact time before the lanternflies succumbed and fell into the trap.

“We find it varies from early to late in the adult life cycle stage. It’s mostly males in the earlier movement of the adults because they seem to be the first ones to move out. Then we find it to be females towards the end stages, because they’re looking to lay the eggs at that point,” Rost said.

The telephone-pole study is in its first year at the CASSE. Brian Walsh, Penn State Extension spotted lanternfly educator, assisted with the study; he has been doing pole studies for three years in the local area.

Rost said that when it comes to spotted lanternfly research, it can be challenging to keep track of the behavioral patterns because of how quickly the insects adapt.

“Every time we think we see a pattern coming up, and we have collected two years of consistent data, it’s completely thrown off track by the third year. So we’re trying to find out if it reverts to the old cycle,” he said.

Adult spotted lanternflies gather in large groups to feed on a favorite or “hot” tree before moving on to the next, said the researchers, who are also trying to figure out why the insects get so attached to one specific tree, and what factors play a role in their fixation. 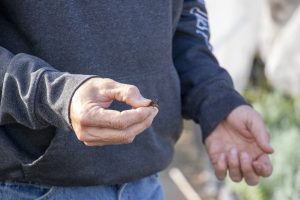 In past studies, Rost found that insecticides that have either bifenthrin or dinotefuran have been effective in eradicating the SLF when used according to the label. Credit: Samantha Bower

About the spotted lanternfly

The spotted lanternfly, Lycorma delicatula, is an invasive insect that came to Berks County from Asia in 2014. Their prominence has since spread along the east coast from Connecticut to Georgia. Spotted lanternfly feeding causes stress on certain plants and localized damage; their feeding does not necessarily kill other plants.

Spotted lanternflies hatch towards the end of spring in May or June, within a week or two depending on the climate of an area. Once the lanternflies hatch, there are four instars — or development stages — that they go through before becoming adults. With each instar, the number of lanternflies congregating together increases.

“At first, when they’re about the size of a tick, they’re spread throughout [the area], feeding on anything they come into, and are always on the move,” Rost said. “As they get more mature, you’re going to start seeing a whole lineup on one plant, but come the next day, they move on to a different plant.”

During the second and third instar, nymphs grow in size and keep their black and white spots. By the fourth instar, they take on a reddish color.

“As they get to that fourth instar, then they’re starting to congregate on woody plants like vines, walnuts, maples, sumac, and trees of heaven. By the time they hit the adult stage, that’s when they’re the most visible and what everybody recognizes,” he continued. 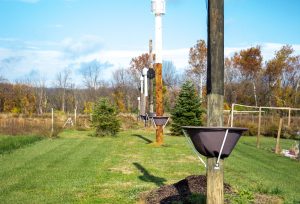 Eight poles were set up in a straight line with two types of traps on each pole: a top trap with an opening at the bottom and a section of pole wrapped with pesticide-impregnated netting. Four of the poles had white netting, while the other four had black netting. The traps were also placed at varying heights on the poles. Credit: Samantha Bower

In past studies, one of the most significant findings that Rost and other researchers at the CASSE said they found is which insecticides are the most effective in killing the SLF but will be least effective in harming non-target species. The researchers tested different application methods on peach trees, grape vines, and trees of heaven, analyzing  the effects on lanternflies according to how and when insecticide is applied to the plants. Currently, insecticides that have either bifenthrin or dinotefuran have been effective when used according to the labels.

About the Center for the Agricultural Sciences and a Sustainable Environment

The Penn State Berks Center for the Agricultural Sciences and a Sustainable Environment was formally established in 2016 for the purposes of conducting agriculture, horticulture, plant and soil ecology, rhizosphere, microbiome, and turfgrass science research, as well as to support teaching and outreach efforts on campus. The center also participates in campus sustainability initiatives through the composting program.