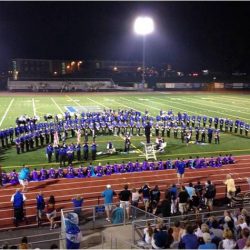 Pagoda Award and special concert to be held Monday, April 3, 2017, at DoubleTree by Hilton Reading as part of the 27th annual Boscov’s Berks Jazz Fest.

Reading – Berks Arts Council will honor Berks County’s championship drum and bugle corps the Reading Buccaneers with the 2017 Pagoda Award for Excellence in the Arts for 60 years of unparalleled performance excellence at 7:00 p.m., Monday, April 3, at DoubleTree by Hilton Reading. The Pagoda Award coincides with the 60th anniversary of the Reading Buccaneers and the 30th anniversary of the Buccaneer Alumni Drum and Bugle Corps.

“On behalf of six decades of Buccaneers, I thank the Berks Arts Council for this incredible honor,” said Corps Director Louis D. Tierno.  “We are proud to have represented the Greater Reading area for the past 60 years, and we have valued our long association with the Berks Arts Council. To receive this recognition from the local arts community, and to share the evening with Al Chez and the Brothers of Funk, is particularly gratifying.  We look forward to a wonderful evening and a great 60th anniversary season.”

Berks Arts Council Board President Lee Olsen stated: “I am proud to announce that Berks Arts Council chose to commemorate the Reading Buccaneers. We are thrilled to recognize the Bucs 60 years of exceptional work.”

Pagoda Award Chairperson Kevin Barnhardt added: “I have spent a lot of time with the Buccaneers over the past year, and I am inspired by the energy and commitment to Artistic Excellence that this corps has shown.”

The Awards Ceremony will include a special Berks Jazz Fest performance to honor the “Bucs” with Buccaneers’ alumnus Al Chez performing with his band — The Brothers of Funk Big Band.

Karen Haver, Berks Arts Council Executive Director, shared: “With the long history of production support from the Reading Buccaneers for the Berks Jazz Fest, we felt that the fest was the ideal time to honor the Bucs. Including the concert and awards in the fest allows us to really create a special celebration.”

Chez has a long and storied career with multiple ensembles in the DCA and Drum Corp International (DCI), including the Buccaneers. He is best known for his 25-year stint on trumpet and flugelhorn playing on Late Night with David Letterman and the Late Show with David Lettermen.  In 1979, Chez joined forces with Jon Bon Jovi to create the band the Atlantic City Expressway, playing in clubs on the Jersey Shore. Chez went on to play with Tower of Power, Robert Cray Band, Spyro Gyra, Sting, Rolling Stones, Eric Clapton, Bon Jovi, CeeLo Greene, Snoop Dog, James Brown and many others before joining Paul Shaffer and the Late Night Orchestra.

Al Chez and The Brothers of Funk Big Band are not your typical big band.

In 2008 Chez met up with musicians Jimmy Steele and Jarred Streiff and the result was Al Chez and The Brothers of Funk Big Band, which has reinvented the big band sound by changing up classic rock, soul, jazz and standard music to a unique and powerful sound.

Along with its unique musical arrangements of rock-soul-jazz-blues standards and original tunes, Chez’s stratospheric trumpet playing and soulful vocals make for a magical and memorable show.

Chez started his musical career at the age of 9 when he joined his local drum corps. Chez still donates his time to drum corps activity, working with many corps and bands.

Reading Buccaneers were organized in 1957 as a parade corps comprised of veterans of World War II and Korea who had aged out of the local junior corps.  They won their first VFW championship in 1960.   The Buccaneers are a charter member of the Drum Corps Associates (DCA) and compete annually for the DCA World Championship.  In 1965 the Buccaneers won the first DCA World Championship, a title they have held a record 14 times, most recently in 2015 when they had an undefeated season. They have been DCA finalists for over 20 consecutive years, consistently placing in the top 5 since 1998.

The first Pagoda Award was presented to the late Gertrude Sternbergh in 1993 in recognition of her valuable contribution to the arts in Berks County. Over the past 20 years, the awards were expanded to include multiple recipients celebrating contributions to the arts through excellence, patronage, and leadership.  Over 30 individuals have been presented since the award’s inception.

The Pagoda Awards and special concert will be presented on Monday, April 3 at DoubleTree by Hilton Reading, for more information visit PagodaAwards.com.   Tickets for the Award Ceremony concert are $25 and are available through PagodaAwards.com, BerksJazzFest.com, Santander Arena Box Office, or by calling ticketmaster at 1-800-745-3000, or Ticketmaster outlets.  For more information, please contact the Berks Arts Council at 610-898-1930.

The mission of Berks Arts Council, a 501(c)(3) non-profit organization, is to cultivate, promote, and support the arts in our community through collaboration, education, and presentation.