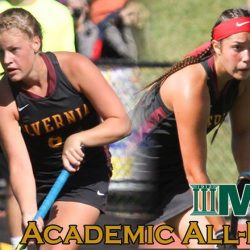 A total of 11 field hockey student-athletes were recognized for academic and athletic excellence.

“These recipients represent the true meaning of a student-athlete,” said Executive Director Andrews. “This is one of the top conference awards we give out each season. It honors our student-athletes who excel both in the classroom and on the playing field.”

Wentzel, a health care science major, posted one of the most decorated careers in field hockey program history. In her senior campaign, Wentzel was named Longstreth/NFHCA Second Team All-American and Synapse Sports First Team All-American. Wentzel also received First Team nods for NFHCA All-Region, ECAC South All-Stars, and All-MAC Commonwealth. She was named the MAC Commonwealth Offensive Player of the Year for the second consecutive year while being selected the MAC Commonwealth Player of the Week four times.

An Academic All-MAC recipient for the second year in a row, Wentzel will graduate from Alvernia as the career leader in points (226) and assists (42) and second all-time in goals (92).

Wysocki, an occupational therapy major, had a standout junior year. Named Second Team All-Region, Wysocki recorded 17 goals and 7 assists. She finished the season tied for first in the conference in game winning goals, notching the game-ending tally in 6 contests, including Hood and Stevenson. She was ranked 4th in the MAC in goals, and 5th in total points with 41. Wysocki also made her first appearance on the MAC All-Commonwealth team, being named First Team as a Forward.

This is Wysocki’s first selection to the Academic All-MAC.

Wentzel and Wysocki mark the first Crusaders to be named Academic All-MAC for the 2016-2017 academic year.