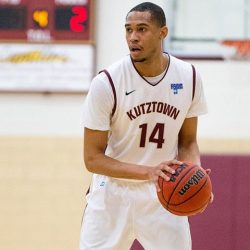 Josh Johnson of the No. 6 Kutztown University men’s basketball team won his first Pennsylvania State Athletic Conference (PSAC) Eastern Division Athlete of the Week award on Feb. 20, becoming the third Golden Bear to receive the honor in the last five weeks. It is the sixth time the senior has received the honor is his career.

KU (22-2, 18-2 PSAC) extended its winning streak to 14 games, tied for the third-longest in program history, with victories over East Stroudsburg (96-92) and Millersville (90-78) last week. In the process, the Golden Bears also moved into fourth in the program annals for wins in a season and tied last year’s team for most PSAC victories in program history.

Johnson was a major part of Kutztown’s two wins as he averaged a double-double with 20.5 points and 10.5 rebounds in 29.5 minutes per game, while also making 3-for-4 3-pointers and 6-of-7 free throws.

In a four-point win vs. East Stroudsburg on Wednesday Feb. 15, KU held a two-point lead with just 24 seconds left, but Johnson hit two clutch free throws to close out the victory. He led all players with 12 rebounds, to go along with 15 points, to record his third double-double in four games, as well as his team-leading seventh this season.

Johnson did not shy away on Senior Day Saturday against Millersville. He was a force all afternoon as he fell one rebound short of his second consecutive double-double and fourth in the last five games. Playing in the final regular season home game of his career, he poured in a season-high 26 points on 10-of-15 shooting, which included shooting a career-best 3-for-4 from 3-point range and 3-of-3 at the line.

The two performances have Jonson currently ranked eighth in the PSAC with an average of 7.2 rebounds per game and 15th at 15.7 points per game. He is also atop the league with a 64.0 field goal percentage, which ranks ninth in the NCAA, and is seventh in blocks per game (1.2) and 14th in steals per game (1.6).

Currently atop the PSAC East by a half game with two contests remaining, KU can clinch at least a share of its second consecutive PSAC East title, and sixth in the last 10 years, as well as the No. 1 seed in the upcoming PSAC Tournament with a win at Bloomsburg on Wednesday, Feb. 22 at 7:30 p.m.