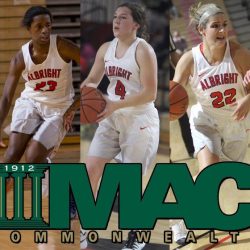 Janice Luck earned Coach of the Year, and Alysha Lofton received First Team honors. Jane Joyce and Nina Mazzarelli were picked to the Second Team while Shannon Thomas was selected as an Honorable Mention.

Luck earns her third consecutive MAC Commonwealth Coach of the Year Award and her fourth overall in leading the Lions to a perfect 16-0 record in conference play and a 22-4 overall record. The Lions are heading into the team’s third straight trip to the MAC Commonwealth Championship game. Albright’s win over Lycoming in the tournament semifinals on Wednesday night gave Luck 200 career victories, extending her lead as the program’s winningest coach.

Lofton’s selection to the First Team marks her first such honor. She is shooting 53 percent from the field and is nearly averaging a double-double, scoring 12.5 points per game while grabbing 9.8 rebounds per game. She is ranked second in the league in rebounding and is second in double-doubles. She has 12 of those this season, and she has four in her last five games. She is also ranked second in the conference in steals and third in assist-to-turnover ratio. Lofton won two MAC Commonwealth Player of the Week awards and picked up an ECAC Player of the Week award.

Joyce earns her second postseason distinction from the league after being named an Honorable Mention last season. She leads the conference in assists with 94 and assists per game with 3.8. She is also fifth in the conference in steals. Joyce is third on the team in rebounding from her point guard position, grabbing 5.5 boards per game. She has had as many as nine rebounds in a game four different times this year.

Mazzarelli earns her first All-MAC Commonwealth team selection with a spot on the Second Team. She’s one of the top three-point shooters in the league as she leads the conference in three pointers made with 54 and is second in three-point field goal percentage, making 37 percent of her shots from downtown. Mazzarelli won her first MAC Commonwealth Player of the Week award earlier this month after averaging 27 points in a pair of wins. She had a career-high 31 in a win over Alvernia that week.

Thomas, the lone senior of the group to make the All-MAC Commonwealth Team, has a spot for the third consecutive season after making the Second Team in each of the last two seasons. In her senior year, Thomas is third on the team in scoring with 11.6 points per game. She’s also just behind Mazzarelli in three-point shooting. Thomas is second in the league in makes from behind the arc with 51 and is third in three-point field goal percentage, making 36.7 percent of her shots. Thomas set the school’s single-game record for three pointers with eight in a win over Arcadia in January. Two games before that, she surpassed 1,000 career points in a win over Alvernia to become the 15th player in school history to reach that mark.

Albright will host Messiah in the MAC Commonwealth Championship on Saturday, Feb. 25 at 2 p.m.