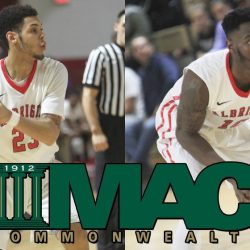 Smith’s selection is the first of his career. He is ninth in the league and first on the team in scoring, averaging 14.6 points per game. He has scored in double figures in 20 of the team’s 26 games and has five games of 20 or more points. He has scored in double figures in 10 straight games. Smith reached the 1,000-point mark in last Saturday’s game against Messiah.

He is also 10th in the league in rebounding, pulling down 6.1 boards per game. Smith is also ranked 10th in the MAC Commonwealth in assists and 11th in field goal percentage.

Ringgold makes his second All-MAC Team after being named to the Second Team last year. Ringgold also surpassed 1,000 career points earlier this month at Alvernia, and he currently has 1,065 for his career. Ringgold is second to Smith in scoring, averaging 13.4 points per game. That’s good for 12th in the MAC Commonwealth. He’s also ranked fifth in the conference in made three pointers with 53.

Ringgold has 18 double-digit scoring games this year and has reached at least 10 points in each of his last 10 games. He poured in a career-high 28 points in a win over Stevenson in January.

The Lions will go for their 11th conference title on Saturday, Feb. 25 at Lycoming at 5 p.m.