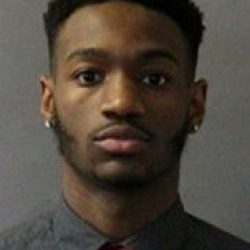 Annville, Pa. – Alvernia Senior Marquis Marshall was named the MAC Commonwealth Player of the Year, announced on Feb. 24 by the Middle Atlantic Office.

Marshall dominated Alvernia’s offense this season, racking up 570 total points. Averaging over 20 points a game, Marshall led the Crusaders in field goals (221), free throws (99), and free throw percentage (.767). He was also a key component in Alvernia’s defensive game, gathering a conference-high 244 rebounds and a team-best 56 blocks.

Across 26 contests, Marshall put together 13 double-doubles and was named the Alvernia Male Athlete of the Week eight times. He netted double digits in every matchup, including fifteen 20+ point games and three 30+ performances.

Marshall, who also receives First Team honors with his Player of the Year selection, is currently nationally ranked in the top-50 in 10 categories. He is in the top-10 in field goals made, where he sits in 6th place, and is 8th overall in total minutes.

Marshall finishes his career with the Crusaders ranking second in program history in points per game (20.6), fourth in double-doubles (20), tied for 12th in field goal percentage (.494), and 20th in field goals made (345).