Local History Talks with Bob Wood return in March at Studio B, Boyertown 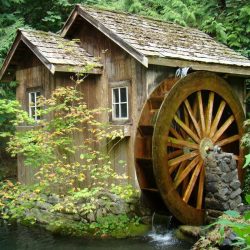 Bob Wood, historian, writer, artist, and teacher, announces his Sunday schedule of History Talks for March and April 2017 held at Studio B, 39A East Philadelphia Avenue in Boyertown, PA. Each talk is scheduled between 1:00-2:00 p.m. Talks are free and open to the public.

March 12: “Water Power”—Water wheels were common features on the banks of most local streams during the 18th and 19th centuries.  This talk describes the construction and operation of grist mills, saw mills, clover mills, carding, mills, hemp mills…in short anything that needed power. Millwrights hand-built these complex wooden machines.

March 19: “Mountain Mary”—This popular discussion features myths and lore (and maybe even the truth) about an enduring figure in Berks County’s history.

April 9: “When the Army was Here, September 1777.” General Washington and the American Army camped here for a few days during one of the bleakest times of the Revolutionary War, September 20-24 of 1777.

April 30: “They were here for 10,000 Years.” Discussion centers on Native American habitation of the area.

Wood has written 4 volumes of essays on local history and is a long time researcher, writer, and speaker on Pennsylvania Dutch (German) folk culture. Wood has established himself as one of the foremost experts on the subject in this area.