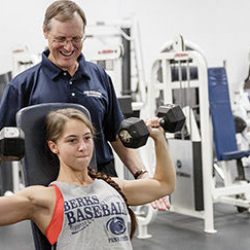 Is it possible for people to become addicted to exercise? In a culture where 70 percent of the population is overweight or obese, and yet only 15 percent exercise regularly enough to gain health benefits, why should anyone bother to study people who may exercise too much and produce detrimental consequences? These are the questions that Dr. Bruce Hale, Professor of Kinesiology at Penn State Berks, ponders in his research on exercise dependence.

“Evidence suggests that up to 3-4 percent of the population may suffer from exercise dependence, a condition where individuals feel compelled to exercise even when excessive exercise leads to medically, vocationally, and socially adverse consequences and withdrawal symptoms when they are forced to stop,” Hale explains.

“In our specific line of research, we have sought to understand why people continue to over-exercise in some weight lifting activities even though they are jeopardizing their health, reducing their career possibilities, and disrupting relationships with families and partners.”

This line of research evolved from an undergraduate thesis of one of Hale’s ex-bodybuilding students while he was teaching in the United Kingdom. This former bodybuilder was concerned and unable to understand why many of his old friends were spending all of their days in the gym to the detriment of career achievements and social relationships. Together, they devised and validated a new measurement inventory (Bodybuilding Dependence Scale) over the next four years in a series of published studies to try to understand the psychological and social antecedents of exercise dependence in weightlifters.

When Hale joined the faculty of Penn State Berks in 2003, he was interested in resurrecting this line of research. He and an undergraduate student undertook another study to further validate a number of exercise dependence questionnaires commonly used in the literature. In 2008, they reported that several of the better validated inventories showed possible gender biases in various subscales that make up the exercise dependence construct, a potentially serious problem for researchers in the field. Next Hale found numerous male powerlifting and bodybuilding Kinesiology majors at the college—including Michael Briggs, who is now an Instructor in Kinesiology at Penn State Berks—who wanted to collect more data for their theses on these cohorts.

Their 2010 published data showed that in this sample, both bodybuilders and power lifters were higher in exercise dependence than fitness lifters, but fitness lifters seemed to have a higher drive for muscularity, a finding they still cannot explain.

Finally in 2013, they returned to the question of whether exercise dependence was as prevalent in female bodybuilders as it has been in males. With the help of one female Kinesiology major who participated in the “Arnold Bodybuilding Competition” in Ohio while collecting data and another student who collected data from local female lifters for her thesis, they were able to gather enough information from female bodybuilders and fitness lifters to perform statistical analyses. The results showed that female bodybuilders were no different than their male counterparts: They too were much higher in multiple measures of exercise dependence than female fitness lifters.

Eighteen years of undergraduate research has resulted in eight published articles and six invited chapters, and Hale can say with some certainty that for a very small percentage of the exercising population (especially male and female bodybuilders and some weight lifters), exercise can become addictive.

But what can researchers learn from these individuals that might help to motivate others to undertake a regular healthy exercise regimen?

“First we know that people will start a program if their physical self-esteem and body image are low. Perhaps we can show these individuals that regular exercise, including weight lifting, can improve their fitness and make them feel better about the way they look. This initial motivator might keep people adhering to exercise programs,” states Hale.

“Next, we have learned that committed exercisers usually set exercise goals. In order to avoid becoming addicted to only ‘appearance goals’ (muscle size, weight, etc.), it may be necessary to set ‘fitness goals’ (increased workout times, endurance goals, health-related cardiac goals) that benefit health and wellness in the long run and don’t risk addiction to appearance goals.

“Finally, when we look at dependent weight lifters, we can see that a strong social support network of workout partners may be necessary for regular adherence to exercise. Most of us could benefit from recruiting others to regularly work out with us to help us maintain a healthy habit.”

It is clear from these studies that undergraduate Kinesiology research interests can produce some highly significant findings and useful practical applications for improving our health.