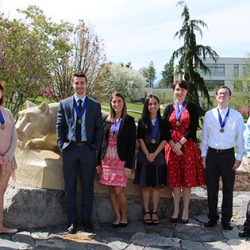 Eight members of the Penn State Berks graduating class received their Schreyer Honors Medals at the Academic Achievement Awards Ceremony held on Sunday, April 23, 2017. Medals are awarded upon completion of the requirements of the Schreyer Honors College, including a capstone Honors thesis.

Awardees included Rachel L. Alba for her thesis, “Validating the Use of Peripheral Bone Sites to Predict the Risk of Femoral Neck Fracture”; Elizabeth M. Cairnie, “Framing and Rhetorical Themes in 1970s-1980s Mediated Abortion Discourse in New Zealand”; Adriana Perez Camacho, “Hispanic Acculturation and Advertising: An Analysis of the Use of Cultural Symbols, Language Variations, and Models in Video Advertisements Targeting Hispanics”; Erik D. Lewis, “Perchance: Dreams and Demons”; Cezary Mikoluk, “The Regulation of Lipid Storage by the RNA Binding Protein, transformer2 (tra2), in Drosophila”; Laura R. Post, “Distinguishing between Specialism and Opportunism in the Diet of Herring Gulls”; Katie B. Ringler, “Ecological Succession of Colonial Waterbirds”; and Walker T. Webb, “Arrangements from the Life of Gavel Halliday.”