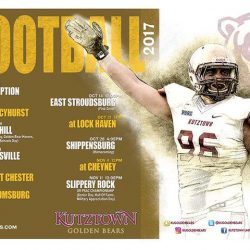 The Kutztown University football team returns in 2017 as the defending Pennsylvania State Athletic Conference (PSAC) Eastern Division champions after pulling off one of the greatest turnarounds in school history. KU has title aspirations once again, with hopes of producing a strong opening three weeks to the season to set the tone for the year.

The Golden Bears dropped their first three games of last season and entered divisional play with uncertainties about how the rest of the year was going to play out. Little did they know, they were about to pull off the greatest turnaround in school history. For the first time in more than a century of KU football, Kutztown turned three straight losses into seven straight wins en route to a perfect 7-0 divisional record and the PSAC East title – the third title in school history and the first perfect PSAC season.

“I’ve never been a part of that big of a swing, starting 0-3 and then running the table,” head coach Jim Clements said. “We weren’t going to get those games back, so we had to maintain our focus on the one game ahead of us. I thought we did a better job of protecting the football, causing turnovers and getting off the field on third-down – all areas we need to continue to improve upon heading into this season.”

Clements enters his fourth year at KU and 12th year as a head coach. He has achieved winning seasons in each of his first three years and was recognized by his peers as last year’s PSAC East and KU Men’s Coach of the Year.

With all of Clements’ success thus far at KU, he knows there is great potential for this program to continue to grow – particularly, finishing games and getting results early in the season. In his three years, KU has posted a 2-7 record in its opening games before starting divisional play.

Kutztown opens its season on Sept. 2 at home against Assumption – a team that has competed in back-to-back Northeast-10 championship games and NCAA Tournaments, and whom KU has fallen to the last two season-openers. KU follows with rematches against Mercyhurst and Seton Hill – both games that Clements was disappointed in.

“Assumption has proven to be one of the best teams in our region year-in and year-out,” Clements said. “Mercyhurst is a well-coached team that will play tough, physical and present us with challenges offensively. We just didn’t look sharp against a Seton Hill team with a lot of talent at the skill positions, so we’re excited for the challenge this year will bring.”

Kutztown graduates NFL caliber and all-time record holders from its title team last year, so opportunities will be for the taking at positions on both sides of the ball.

West Chester has proven to be one of the perennial powers in the East, and that looks to be no different this season after the Golden Rams ended last season on a six-game winning streak. Along with Kutztown, Shippensburg and Bloomsburg also posted winning seasons last year and look to be strong contenders in the East.

QUARTERBACK – It took three quarterbacks for Kutztown to find its gunslinger last year. Collin DiGalbo (Secane, Pa./Monsignor Bonner) embraced that opportunity and went on to lead KU to a 6-1 record with him under center. He earned All-PSAC East Second Team honors and the PSAC East Freshman of the Year. DiGalbo brings a dual-threat for KU, posting four school-rushing-records last year for a quarterback, as he tallied eight touchdowns on the ground and 10 through the air.

DiGalbo has proven he is not afraid to put his body on the line for a first down, or more (school-record 82-yard TD run for a QB), so his continued preparation for being the No. 1 option can help him continue to progress moving forward.

Chris Kane (Maple Glen, Pa./La Salle College) enters his fifth year in the program after missing 2016 due to injury, while Eric Nickel (Bridgewater, N.J./Bridgewater-Raritan) brings a 6-4, 265 lb. frame with a strong arm into his redshirt-freshman campaign.

RUNNING BACK – Last year was one of Kutztown’s best years in history running the football. KU ran for the second-most yards in school history while scoring a record 29 touchdowns. The Golden Bears showcased a stable of capable backs, and return their most prolific in 2017.

Craig Reynolds (Willow Grove, Pa./Abington) had a breakthrough campaign as an all-around back last year. He ran for 1,189 yards and 14 touchdowns – both third in school history – highlighted by a school-record 261 yards and 345 all-purpose yards at East Stroudsburg under the lights. He earned All-PSAC and All-Region First Team accolades and enters his redshirt-junior season this year as a team captain.

Abdul-Hassan Neblett (Newark, N.J./Paramus Catholic) enters his redshirt-sophomore season with a year under his belt. He has great speed and explosiveness for a No. 2 back, and can also help in other areas of the offense. Evan Culver (Hellertown, Pa./Saucon Valley) redshirted last year as a true freshman and has the potential to be KU’s next breakout back after a promising spring.

WIDE RECEIVER – KU will be extremely young at wide receiver after graduating record-breaking seniors the last two seasons. This will be one of the greatest positions of opportunity for KU, hoping to gain speed out of the position.

Ryan Hubley (Oxford, Pa./Oxford Area) didn’t get significant touches last year, but is someone who can go up and win 50/50 balls and play physical. Conor Sullivan (Whitehall, Pa./Whitehall) saw action last year as a slot receiver, as Nate Harka (Hellertown, Pa./Saucon Valley) also had a strong spring in the slot.

TIGHT END – Andrew Garbarino (Peckville, Pa./Valley View) enters his senior season as a blocking tight end and has been a starter at the position for years. Jorden Sekol (Old Forge, Pa./Old Forge) comes off a redshirt season last year.

Justin Tindull (Seven Valleys, Pa./Dallastown Area) gained experience at multiple positions last year and is expected to start at left tackle this season after getting reps during spring camp. Matt Cella (Springfield, Pa./Springfield) started at guard as a true freshman last year and can play on either side as a starter. He was named the team’s most improved player in the spring. Jake Adams (Pottstown, Pa./Pottsgrove) comes off a redshirt season and shows promise on making an impact this season.

Coming off an injury-ridden season, Mike Italiani (Bethlehem, Pa./Bethlehem Catholic) is projected as the starting center for the first time in his career. Clements is excited for a potential full season of Italiani and for someone who can keep KU strong up front.

Kutztown’s most experienced lineman will be senior Skyler Panchari (Pottsville, Pa./Blue Mountain) at right tackle. Panchari has started the last two years on the right side and has proven to be able to anchor a line to successful run games. He missed most of the spring due to injury, so getting back into the physical shape he was in his 2016 preseason will be key.

Clements’ recruiting class this season focused on lineman on both sides of the ball, so a plethora of freshmen come to camp this fall looking to make an immediate impact. A freshman offensive lineman has started at some point during each of Clements’ three seasons, so there’s no reason to think it couldn’t happen again.

DEFENSIVE LINE – The Golden Bears could have the best defensive ends in the league. As a unit, KU’s defensive front was constantly in the backfield last season on KU’s way to posting its most sacks in a season in 30 years.

Ronny Tomasetti (Dickson City, Pa./Mid-Valley), a team captain, earned All-PSAC and All-Region honors last year. He led the team with 13.0 tackles-for-loss and a career-high 7.5 sacks. He has 15 sacks in his career and will begin to move his way up the record book this year, potentially eyeing the record of 25.5.

Steve Plousis (Philadelphia, Pa./Ridley) also enters his senior season and had his best career season last year with 34 tackles and 10 for a loss. He had 6.5 sacks and was a consistent starter on the outside.

Zameer McDowell (Royersford, Pa./Spring-Ford (California (PA))) earned All-PSAC honors in 2015 but missed most of last season due to injury. With the prominent depth atop the position group, McDowell could be used at tackle to get as much talent on the field as possible.

LINEBACKER – Tajier Jefferson (East Orange, N.J./Queen of Peace) headlines the linebacker position as a two-year All-PSAC starter and 2017 team captain. He has combined for 150 tackles in his first two years with 25 tackles-for-loss and six sacks. He has only missed one game in his career thus far and gives KU great experience inside.

Luke Snyder (Levittown, Pa./Pennsbury) saw significant reps last season and should expect increased playing time this year. He will be joined by TwyNique Chisholm-Wilkerson (Harrisburg, Pa./Steelton-Highspire) as leading contenders for the second starting spot at linebacker.

CORNERBACK – Competition was high last year in the secondary, and Ahkee Cox-Cowan (Harrisburg, Pa./Harrisburg) emerged as a starter down the stretch as a true freshman. He had 42 tackles and three interceptions and aims to be one of KU’s top returning cornerbacks.

Jhaloni Johnson (Flourtown, Pa./Springfield Township) also saw increased reps as the season progressed and returns as a junior with some of the most experience in the position group. Nyiem Nevarez (Effort, Pa./Pleasant Valley) has great speed and could see increased time this year as well.

SAFETY – Jalen Nieves (Bensalem, Pa./Bensalem) enters his final season in the Maroon and Gold. He has played in 27 career games with 174 tackles and four interceptions. He will be one of the leaders on the backend of the defense, but also finds himself attacking the run game.

Jake Perry (Harrisburg, Pa./Central Dauphin) thrived in his first full year as a starter last year. He hauled in five interceptions – third in the PSAC – to earn All-PSAC East First Team honors as a sophomore. He had 52 tackles and has grown into the focal point of the secondary.

Marquise Poston (Philadelphia, Pa./Frankford) comes off an injured 2016 season and returns as a senior in 2017. Shawn Turber-Ortiz (Northumberland, Pa./Shikellamy) redshirted last year and has potential to see time as a third safety.

SPECIAL TEAMS – Alec Rosenfeld (Bensalem, Pa./Bensalem) missed last season due to injury, but returns as a strong and consistent kicker for Kutztown this season. He was an All-PSAC and All-Region kicker his freshman campaign in 2014, when he set school-records for field goal percentage in a season and field goals in a game.

Dean Krcic (Saylorsburg, Pa./Pleasant Valley) moves into the punter role after redshirting as a freshman last year, but will also compete for time on kickoffs and at placekicker. Senior long-snapper Tristan Shoopack (Pottsville, Pa./Pottsville Area) looks ahead to his final season in the Maroon and Gold.

UP NEXT – The Golden Bears open their season on Saturday, Sept. 2 at home against Assumption – an NCAA Tournament team last year. Kickoff for the home-opener, as well as four of KU’s six home games this season, will be at 12:05 p.m.

Family Day is scheduled for Sept. 23 against Millersville at 6:05 p.m., while homecoming is Oct. 28 against Shippensburg with a special 4:05 p.m. kickoff.