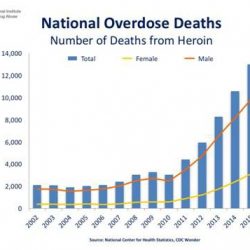 The opioid epidemic around the nation is killing staggering numbers of Americans every day. According to the National Institute on Drug Abuse “Every day, more than 90 Americans die after overdosing on opioids.” That is a staggering number and it is hitting closer to home than ever. “The number of people who died of heroin overdoses in Berks County increased for the fourth consecutive year in 2014, with the total of 26 amounting to three deaths more than occurred the previous year and more than double the number who died of heroin in 2010,” stated the Caron Rehab Center. That number does not include the addicts that were revived with naloxone by emergency medical services (EMS) personnel.

The rise in these opioid overdoses is due largely in part to the amount of prescription opioid medications that are being prescribed by doctors. The CDC reports that “the amount of prescription opioids sold to pharmacies, hospitals, and doctors’ offices nearly quadrupled from 1999 to 2010.” With numbers like that it is no wonder that more people are becoming addicted to opioid drugs. When the doctors no longer prescribe the medication, they turn to the illegal drug. Heroin is cheap and readily available from nearby cities such as Reading and Philadelphia. This crisis is not specific to a certain gender, age or social status. Heroin can be found in every community in Berks county. No community is immune.

Being a volunteer at a Berks county fire department I see the epidemic first hand. The fire department I volunteer with is in a rural portion of Berks County and at least once a month we get dispatched to assist the ambulance with a heroin overdose. It seems like these occurrences have become even more common due to naloxone also known as narcan, which is a drug that reverses the effects of the overdose. After it is administered patients wake up like nothing ever happened. Addicts have become less afraid of overdosing because they know that emergency medical personnel will come and give them narcan and they will receive no repercussions from law enforcement. Addicts themselves are carrying narcan so that they can administer it to their friends if needed decreasing the fear of overdosing further. Even police carry narcan as they are often the first people to arrive to an overdose. To increase the potency of heroin addicts sometimes mix heroin with fentanyl which is 20 to 40 times more potent then heroin. Fentanyl poses a threat to the emergency personnel caring for the patient as it is absorbed through the skin on contact and causes respiratory arrest. There have been several incidents in the immediate area of emergency personnel needing to be treated at local hospitals after coming into contact with this drug.

President Trump recently declared the opioid crisis a public health emergency, bringing into greater focus the problem our country is facing. Opioid abuse has become the leading cause of injury death in this country more than gun deaths and car crashes. Hopefully sometime in the near future with increased funding, awareness, and education we can eliminate the opioid crisis.