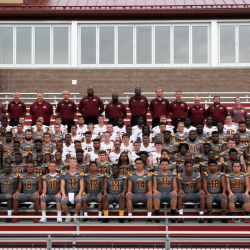 Six hundred ninety-three days ago Alvernia University President Dr. Tom Flynn, Athletic Director Bill Stiles, and the Board of Trustees announced the addition of Football as a varsity sport at Alvernia. When that announcement was made on October 5, 2016, it felt like the 2018 kickoff was such a long way away. Now, the Golden Wolves are just three days away from kicking off that new chapter.

The Golden Wolves will open up their football era on Saturday, September 1 at 1:00 P.M. against Gallaudet University. The Bison come off a 3-7 overall record in the 2017 season, and are ranked 4th in the Eastern Collegiate Football Conference (ECFC) preseason poll. Two weeks later, following an early season bye week, Alvernia will kick off its MAC schedule on home turf against FDU Florham, who was picked eighth in the MAC Preseason Poll. The Golden Wolves are one of seven schools across the nation adding football this year, and will cap off their inaugural season on November 10 on the road competing against another first year team in the University of New England.

While there is still a great deal of prep work to be done over the next couple of days, so much more has happened In the past 693 days while the university has prepared for the 2018 season. Alvernia hired a football coaching staff, led by Head Coach Ralph Clark. A stadium has been built where once a bare grass hill and a few small sets of bleachers stood. The university closed out the era of the Crusaders and ushered in the Golden Wolves. Coach Clark and his staff have hit the recruiting trail up and down the east coast.

There was a first every practice just after dawn on September 6 of last fall.  Dr. Flynn presided over a group of 51 players–many on a knee with a hand on a helmet–to give his own pregame pep talk.  That first fall featured more 6 A.M.s, video sessions, weight training and three intersquad scrimmages.

Then just a few weeks ago on August 10, the final chapter of this 696 day preparatory journey began when 115 football players moved onto campus for their first preseason camp. While the team held practices and scrimmages over the past year, this was the first time this inaugural cohort was all together working towards that September 1 kickoff.

It seems like just yesterday the Alvernia community gathered for a special announcement on top of a bare hill that was soon to be home to a stadium. On September 1 at 1:00 PM, a 696-day journey will culminate when the first ball in the Alvernia Football era is kicked off. No one can tell what the future will hold and what success the Golden Wolves will achieve, but these past 696 days have been nothing short of an exciting journey in Golden Wolves history.

Tickets for Saturday’s game will be available at the gate. Tickets are $6.00 for adults, and $4.00 for students and senior citizens. Further Football Gameday information can be found here.