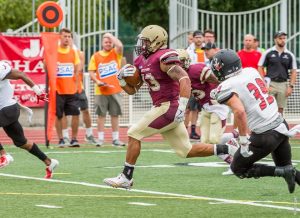 Reynolds led the Golden Bears’ ground attack with 823 yards and 15 TDs on 172 carries, while moving atop the program’s all-time list with 35 career rushing touchdowns. His 15 rushing TDs tied Curtis Wortham’s 2012 total for the second most in a season at KU.

The native of Willow Grove, Pennsylvania showed off his versatility with 40 catches –second most on the team — for 472 yards and three TDs. He also contributed 380 return yards, threw for a score on his only pass attempt of the season in a win at Shippensburg on Oct. 20, and totaled 1,675 all-purpose yards.