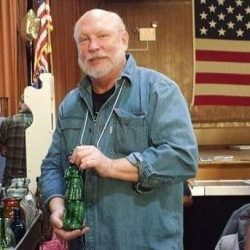 Meet Richard Peal – a new member to the Berks History Center. Richard has dug up an unusual way of connecting with the past! He calls himself “Man of Dirt.”

It all started back in the 70’s when Richard worked as a lineman for what was then, N.J. Bell. He was setting poles with a crew along the railroad in Metuchen, NJ when out of the hole popped a fully-intact bottle, which was inscribed: Thomas A. Edison Special Battery Fluid. This was the first bottle that Richard took home and put on a shelf in his garage. Over the years, while working for the telephone company, quite a few more bottles came home and were put on the shelf in the garage.

In the late 90’s Richard was still working for the phone company, which is now Bell Atlantic. He had a different job at the company when he was working on a road widening project on Route 9 in Lakewood, NJ. One of the contractors was digging up the road and bottles just started flowing out of the ground! It turns out that Route 9 went right through what used to be part of an old Lakewood dump site. Knowing that Richard kept the bottles, the contractor gave him the “go-ahead” and Richard began bringing home truck loads of glass bottles every day. What started as an accidental bottle collection suddenly became serious business!  With his first born son in tow, Richard began digging for bottles regularly and in 1999 he went to his first bottle show in Toms River, NJ.

Later Richard became a member of the Jersey Shore Bottle Collectors Club, and by 2002, he was running the bottle show. Richard ran the show for 10 years until he moved to Exeter Township in 2013. And that’s when his interest in Berks County’s history began.

“There’s no sense in collecting Jersey bottles out here, so I changed it up and I now collect Reading Glass,” says Richard. “Currently, I do 10-12 bottle shows a year and I am always looking for something new to add to the collection.”

When it comes to local history, Richard’s glass collecting hobby has led him down a number of rabbit holes, so to speak. Richard recently visited the BHC Research Library to dig further into the history of Reading Glass Works. He discovered that there were 2 companies. The first, Reading Artistic Glass Works, operated in the 1880s and specialized in art glass. The other business, which manufactured bottles and jars, ran from about 1889 to the 1920’s along the canal at Franklin Street and River Road in Reading.