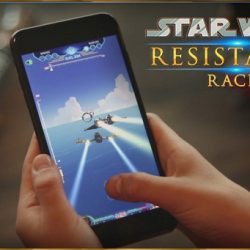 NeoPangea, Disney Channel, and LucasArts use the Force to craft an out-of-this-world racing game for “Star Wars Resistance”

Pilots, start your engines! Beginning this week, fans of Disney’s “Star Wars Resistance” cartoon can join the fight against the oppressive First Order from the cockpit of the Fireball in an all-new starfighter racing game, “Star Wars Resistance Racer.” Play now for free through the DisneyNOW app on iOS, Android, and Kindle devices.

Players take on the roles of series regulars Kazuda “Kaz” Xiono or Tam Ryvora as they customize and race the iconic Fireball starfighter against the Colossus refueling station’s skilled ACE pilots. By testing their skills in a 21-race, multi-cup campaign, players will unlock engine and wing upgrades that can be combined with custom ship color patterns to create their perfect Fireball.

Piloting a customized Fireball is essential as Kaz and Tam go head-to-head with ACE Squadron pilots Hype Fazon, Torra Doza, Griff Halloran, Freya Fenris, and Bo Keevil. To navigate the procedurally generated courses, the Fireball must twist and dive via intuitive one-touch control to pass through race gates while collecting shields and hyperfuel boosts and avoiding dangerous obstacles. Every race is unique. Only players who are strong with the Force will win all 20 cup races to earn the honor of facing the legendary Poe Dameron, hero pilot of the Resistance. Can you defeat Poe in a friendly race and unlock his high-performance X-Wing fighter?

Working closely with Disney Channel and LucasArts, NeoPangea developed this rocket-fueled romp in Unity with the goal of making a fun game that every generation of Star Wars fans could enjoy. The team captured the signature anime-inspired look of “Star Wars Resistance” by developing game-specific assets based on original cartoon series artwork. Genuine series music, sound effects, and voice performances from the series cast all came together to create a thrilling experience that is unmistakably part of the “Star Wars” universe.

“For so many of us, ‘Star Wars’ is probably the franchise that has had the biggest impact on our childhood,” said Aaron Beaucher, the game’s creative director. “When you get to work on something like this, it’s almost as if you’re transported back to being 8 years old.”

Shane Hoffa, NeoPangea’s lead developer, was also honored to work on a game that the team considered to be a dream project. “All the excitement that ‘Star Wars’ brought me as a kid came flooding back to me. I blasted the ‘Star Wars’ theme song when I told my family.”

Aspiring Resistance pilots eagerly awaiting the premiere of the hit animated series’ second season can revisit that galaxy far, far away by playing “Star Wars Resistance Racer” right now. May the Force be with you!

NeoPangea, located in West Reading, is where bespoke digital content and interactive experiences are realized. A creative partner for imaginative brands who dare to dream.