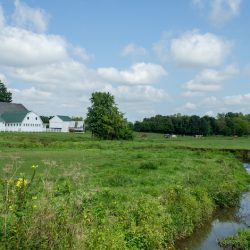 The Pennsylvania DEP has identified agricultural runoff as the source of pollution for 5,765 miles of impaired waterways.

HARRISBURG, Pa. — A new bill in the General Assembly could help Pennsylvania farmers reduce the amount of polluted runoff in rivers and streams and help the state meet its clean water commitments.

Almost one-third of Commonwealth streams don’t meet standards for drinking, fishing or recreation, and farms are a major source of that pollution. Under the multi-state Chesapeake Bay Clean Water Blueprint, Pennsylvania is required to have plans in place to reduce water pollution flowing downstream to the bay by 2025.

But according to Harry Campbell, Pennsylvania science policy and advocacy director at the Pennsylvania office of the Chesapeake Bay Foundation, the state’s current plans fall short by more than 25% of pollution reductions and hundreds of millions of dollars a year.

“We believe that this program will put Pennsylvania in the position to achieve those water quality commitments, both locally and certainly within the context of the Chesapeake Bay,” Campbell said.

Darrin Youker, director of state government affairs with the Pennsylvania Farm Bureau, said farmers are willing to take steps like planting cover crops and streamside trees, no-till farming and reducing nutrient runoff. But he noted the farm economy was suffering even before the pandemic.

“Those cost money, so it’s going to help both on the technical expertise but also the practical, on-the-ground applications that need to be done,” Youker said of the legislation.

Funding from the program would be allocated to county conservation districts based on factors like the amount of land under cultivation and livestock adjacent to impaired streams.

Campbell said Pennsylvania’s farmers want to leave farm land for the next generation that is both beneficial to the environment and has grown more productive through sound agricultural practices.

“These types of investments in our family farms are going to help achieve and maintain that cultural heritage, while boosting our economy in a time where that is of critical importance and concern,” Campbell said.

SB 1272, introduced by Sen. Gene Yaw of Lycoming County, has bipartisan support. It’s been referred to the Senate Agricultural and Rural Affairs Committee for consideration.