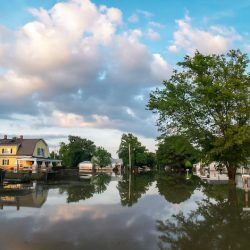 HARRISBURG, Pa. – The public has a chance to weigh in on Pennsylvania’s participation in a program that could reduce greenhouse-gas emissions and air pollution, and grow clean-energy jobs.

Starting Tuesday, the Department of Environmental Protection will hold virtual public hearings on a draft rule to have Pennsylvania join the Regional Greenhouse Gas Initiative (RGGI).

Since 2008, the Northeastern and Mid-Atlantic states in RGGI have cut carbon emissions from power plants by more than 40%.

Patrice Tomcik, project manager of state campaigns for the group Moms Clean Air Force, said it also cuts emissions of other pollutants, such as sulfur dioxide, soot and heavy metals.

“There would be a reduction in premature deaths from respiratory illnesses, fewer hospital visits, preterm births, childhood autism and asthma attacks,” Tomcik predicted.

RGGI establishes a regional cap on carbon emissions that diminishes over time and sells emission allowances to the power industry through quarterly auctions.

There will be ten online hearings between Dec. 8 and 14.

Barbara Jarmoska, treasurer for the Responsible Drilling Alliance, said joining RGGI would be an important step toward slowing climate change that is already affecting Pennsylvania. She lives near a creek on 20 acres of land her family has owned since 1933.

“That creek never flooded the home once until 2011, and we had what was then called a thousand-year flood,” Jarmoska recalled. “And in 2016, just five years later, we had a second one.”

She added cutting methane emissions from oil and gas drilling and infrastructure will also be vital to reducing the floods, fires and extreme weather brought on by climate change.

Tomcik pointed out Pennsylvania is the third-largest emitter of greenhouse gases in the nation.

“We have a responsibility, an obligation to step up and do our part in regard to curbing or cutting our carbon dioxide pollution,” Tomcik contended.