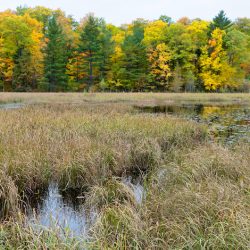 HARRISBURG, Pa. – The Trump administration’s Environmental Protection Agency used questionable criteria to justify redefining which bodies of water are protected by the Clean Water Act, putting many streams and wetlands at risk, according to a new report.

In repealing and replacing the Obama-era Clean Water Rule, said the report from the External Environmental Economics Advisory Committee, the EPA ignored the downstream impact of pollution in waterways that cross state lines and predicted states would step in to protect those waterways. According to report co-author Sheila Olmstead, a professor of public affairs at the University of Texas at Austin’s Lyndon B. Johnson School of Public Affairs, that’s inconsistent with the agency’s own guidelines for economic analysis and leaves many bodies of water unprotected.

“The Navigable Waters Protection rule, which is the replacement rule, removes about 50% of U.S. wetlands and about 18% of U.S. stream miles from federal protection under the Clean Water Act.” she said.

The EPA has said the new rule reflects the intent of Congress in passing the Clean Water Act. President-elect Joe Biden has said he will review and possibly reverse the replacement rule.

The original rule the EPA replaced was based on rigorous scientific study, which found many streams and wetlands are hydrologically, biologically and chemically connected to waters downstream – connections Olmstead said the new rule disregards.

“In fact, the fact that the watersheds they picked for intensive analysis all cross multiple state boundaries tends to be internally inconsistent with their own argument that these interstate impacts won’t be important,” she said.

In 2018, she said, the EPA eliminated its own Environmental Economics Advisory Committee.

Olmstead said she believes part of the problem in determining which waters are protected by the Clean Water Act is the vague language used by Congress to define the term “waters of the United States,” when it passed the original legislation in 1972.

“One would like to see, ultimately, a legislative resolution of that uncertainty,” she said, “rather than having cases keep coming to the courts, and administrations that feel one way or the other overturning each other’s rules.”

She added that the current lack of bipartisan cooperation in Congress may force the Biden administration to rely on the rule-making process to reverse the rule change.