Friends of Hopewell Furnace to Explore Lincoln’s Failures and Successes 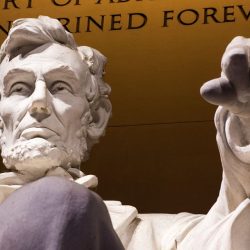 Union Township—Did the American people elect Lincoln president in 1860?  Is there a conflict between the US Constitution and the Declaration of Independence?  These and other questions will be explored as the Friends of Hopewell Furnace host Dr. Randolph Shipley Klein’s presentation: Lincoln’s Failures:  “Success Is Not in Never Failing”.  The free program will begin at 2 p.m. in the Hopewell Furnace Conference Center on Sunday, February 12.

Dr. Klein will explore the theme, “Success is not in never failing, but in rising every time you fall.”  He will discuss not only Lincoln, but also often forgotten aspects of American history and beliefs. Abraham Lincoln came to national prominence as a forceful and controversial opponent of America’s going to war against Mexico.  Later he gained almost mythical stature as the President who fundamentally changed American society and the Commander-in-Chief during the Civil War whose armies won the war that cost more American lives than all other wars combined.

After serving on the history faculties of the University of Wisconsin, Connecticut College, and the University of Pennsylvania, Dr. Klein was associate secretary of the American Philosophical Society.  Author of several books addressing aspects of American History, his popular work, Portrait of An American Family, The Shippens of Pennsylvania, explores five generations of one of the great families of colonial and revolutionary America.

While at Hopewell Furnace National Historic Site visitors are encouraged to go into the village, tour the buildings and learn about iron making and why Hopewell Furnace is important to our nation’s history. Open 9 a.m. to 5 p.m. Wednesday thru Sunday, the park is located five miles south of Birdsboro, PA, off of Route 345. For more information stop by the park’s visitor center, call 610-582-8773, visit the park’s web site at www.nps.gov/hofu, or contact the park by e-mail at [email protected].