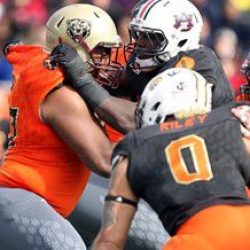 MOBILE, Ala. — Kutztown University football fans would normally only dream about the chance to see a Golden Bear player face off against a couple of guys who played in the Division I National Championship. That dream became a reality on Saturday, Jan 28 at the 2017 Reese’s Senior Bowl in Mobile, Ala. as KU’s decorated offensive tackle Jordan Morgan lined up at left guard and faced off several times with players from both Alabama and Clemson.

Morgan started for the North team and played the entire first quarter in front of a national television audience and more than 32,000 fans at Ladd-Peebles Stadium. The North received the ball first, and Morgan was matched up with Carlos Watkins, a 6-3, 305-pound tackle from national champion Clemson. Although the North went three-plays-and-out, Morgan held his own and began to prove that he can play at the highest level of college football, and potentially the next level.

“I had a lot of fun out there today,” Morgan said. “I felt that today was best day of the whole week. This whole week has been about proving to everyone that I belong out here, and I think I showed that today.”

The second offensive series was much more successful for the North. With Morgan again at left guard, the offense went 58-yards on 12 plays and chewed up 6:58 on the clock to come away with a 22-yard field goal by Arizona State’s Zane Gonzalez. Morgan threw a beautiful block on LSU linebacker Duke Riley to spring Wisconsin’s Corey Clement for a few extra yards on a running play and helped his quarterback, Nate Peterman of Pitt, get loose on a seven-yard scramble. Morgan also held his own in the red zone against Alabama’s Cole Mazza, looking particularly strong in pass protection.

Morgan, whose North team was coached by John Fox and his Chicago Bears staff, returned for the North’s third possession. Even though the drive only lasted four plays, all of which were pass attempts, Morgan again looked strong in protection against Watkins and Alabama’s Davin Tomlinson, another 6-3, 305-pound tackle.

“Working with the Bears staff was great – I learned a lot in a short amount of time, which is always a good thing,” Morgan said. “They gave me some tips on my technique and some advice on things to work on moving forward.

“I feel this week has been monumental in my development as a player.”

Morgan returned to the game with one-minute remaining in the third quarter and the North trailing 16-6. He battled the entire drive with Tomlinson, mostly in pass protection, as the North drove 40 yards in eight plays to tack on a 39-yard field goal by Gonzalez. The field goal put the North back in striking position at 16-9 after three quarters.

Under Senior Bowl rules, the North started the fourth quarter with the ball at its own 25. Morgan played his last series, helping the offensive drive 42 yards on six plays, before a fumble ended the scoring threat.

The North would close the gap to 16-15 with 1:51 remaining on a six-yard pass from Peterman to North Carolina State’s Zay Jones. However, Peterman’s desperation throw on the two-point conversion attempt fell incomplete, ending the North’s bid for a comeback.

In all, Morgan played for a total of five offensive drives and 33 plays, which accounted for 161 yards (4.9 yards per play) and six points.

One of the highlights for Morgan was his receipt of the Gene Upshaw Award at the start of halftime, presented annually to the top offensive lineman in NCAA Division II.

Morgan will next prepare to head to the NFL Combine, which will take place next month in Indianapolis.

“I’ll head home tomorrow (Sunday), and start training Monday,” Morgan said. “I’m looking forward to having a great combine next month, and then it will all be about training and becoming an even smarter football player. I need to continue to develop my body so that once we get to draft day and I get that call and end up in somebody’s camp, I can make an impact.”

For complete coverage of Morgan’s experience in Mobile, go to www.KUBears.com/SeniorBowl17