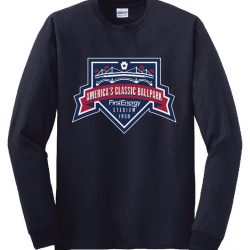 Opening Night is two months away – on Thursday, April 13th at 7:05 p.m. vs. the Richmond Flying Squirrels. The Reading Fightin Phils are kicking off their 51st season affiliated with the Philadelphia Phillies by issuing an America’s Classic Ballpark Long-Sleeve T-shirt for the first 3,000 adults thanks to Penn State Health St. Joseph, Feesers and Commonwealth Charter Academy.  The long-sleeve t-shirt will feature the new America’s Classic Ballpark logo. The long-sleeve t-shirt giveaway is just the first of many promotions that will take place on Opening Night.  More promotional information for Opening Night, and all games, will be announced shortly.Tickets for Opening Night went on sale on Thursday, February 2.  That day, fans took advantage of a SPECIAL one-day discounted sale price of $5 Green Box seats and $15 Pool Pavilion tickets for Opening Night. Opening Night tickets will remain on sale for purchase at the regular price after the sale.  Individual tickets for all other 2017 Fightins home games will go on sale Thursday, February 16.  Season tickets, mini-plans, and group tickets for the 2017 season at FirstEnergy Stadium are available now by visiting fightins.com, calling at 610-370-BALL, or by stopping by the Fightins Ticket Office located at FirstEnergy Stadium.      Throughout the next two weeks, the Fightin Phils will announce their slate of promotions for the 2017 season leading up to the day single game tickets go on sale February 16. Season tickets for the 2017 season are available online at Fightins.com, by phone at 610-370-BALL, and in-person at FirstEnergy Stadium.  Follow the Fightin Phils on Twitter at @ReadingFightins and like them on Facebook via www.facebook.com/fightins.