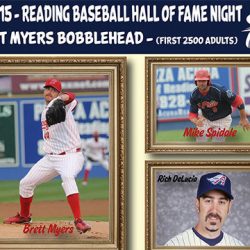 The Reading Fightin Phils are excited to announce that former Reading Phillies standouts Brett Myers and Mike Spidale, along with Wyomissing, PA native and former major leaguer Rich DeLucia will be inducted into the Reading Baseball Hall of Fame on Tuesday, August 15 at 7:05 p.m. courtesy of Penn State Health St. Joseph, 830 AM WEEU and 69 News Berks Edition.

The trio will be honored during a special pre-game ceremony and address the fans. The first 2,500 adults will receive a Brett Myers Reading Baseball Hall of Fame “Old School” Bobblehead, thanks to FirstEnergy.

Brett Myers had an extremely productive career in the major leagues, primarily with the Philadelphia Phillies. He pitched for the Phillies from 2002 through 2009 and won a World Series ring with the Phillies in 2008. He was the game two starter for the Phillies in the World Series against the Tampa Bay Rays. Before making his way to Philadelphia in 2002, Myers was a member of the 2001 Eastern League Champion Reading Phillies. He pitched to a 13-4 record with a 3.87 ERA in 26 games and 23 starts. He struck out 130 batters in 156 innings. He made rehab appearances for Reading in 2008 and 2009.

Myers was drafted by the Phillies in the first round (12th overall pick) of the 1999 Major League Draft from Englewood Senior High School in Jacksonville, Florida and spent eight years of his 12-year major league career with the Philadelphia Phillies. He also pitched for the Houston Astros, Chicago White Sox and Cleveland Indians before retiring in 2013.

Since retiring from professional baseball, Myers now devotes his time to music. He’s a singer and songwriter, and has produced two albums: Backwoods Rebel and You’re Welcome.

He’ll be joined by Reading’s all-time Hit King Mike Spidale, who became a fixture for the Reading Phillies from 2007-2012. Spidale holds the Reading all-time career record for hits with 570, and games played with 515. He is also third in career steals with 93. Spidale is also a two-time Reading Phillies team MVP, winning the award in both 2010 & 2011. In 2010, he hit .303 with three home runs, 50 RBIs, 74 runs and 31 stolen bases. In 2011, he finished 3rd in the Eastern League with a .326 average and second in the Eastern League with 161 hits. His .326 batting average currently ranks 8th all-time in Reading Fightin Phils history for the highest batting average in a season. His 161 hits are currently tied for 6th all-time in Fightin Phils history for hits in a season. Spidale was signed as a minor league free agent by the Phillies in June of 2006.

Since Spidale has left the game after the 2012 season he has become a year-round resident of Baseballtown, and has stayed active in the Reading area. He currently owns and coaches the Berks Bulls Baseball Organization, and is an assistant coach for Alvernia University Baseball.

Rounding out the Reading Baseball Hall of Fame Class of 2017 is Wyomissing, PA native and former major leaguer Rich DeLucia. DeLucia made his major league debut at age 25 for the Seattle Mariners vs. the Boston Red Sox on September 8, 1990. He spent ten seasons in the major leagues pitching for the Mariners, Cincinnati Reds, St. Louis Cardinals, San Francisco Giants, Anaheim Angels, and Cleveland Indians. He won a career-best 12 games in 1991 for the Mariners. DeLucia graduated from Wyomissing High School in 1982 and was drafted by the Seattle Mariners in the sixth round of the 1986 Major League Draft from the University of Tennessee. DeLucia still lives in Berks County, in the Governor Mifflin School District, and is currently a scout with the Los Angeles Dodgers.