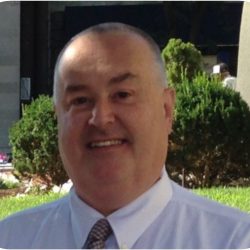 Wernersville – The South Mountain YMCA’s Board of Directors elected Adrian Grieve as president of the Board of Directors for 2017 and 2018. Adrian was born in Edinburgh, Scotland and grew up near Lockerbie, Scotland. He first came to Berks County in 1983 to work for the summer at YMCA Camp Conrad Weiser, part of the South Mountain YMCA Camps, and returned as a camp counselor for the summer of 1984. After graduating college in June of 1985, he returned to the South Mountain YMCA Camps, working full time until December 1986. In 1989, Adrian joined the Red Cross as a volunteer and then the staff of the American Red Cross, Berks County Chapter in September 1992. He currently acts as the Executive Director of the Tri-County Chapter, providing service to Berks, Chester and Schuylkill counties, in the Eastern PA Region of the American Red Cross.

Additionally, Grieve has volunteered on the Board of Directors of the Berks County Humane Society, Berks Advocates Against Violence, and the Hispanic Center Daniel Torres. He is an Elected Delegate of the Berks County Democratic Committee and was an active member of the South Heidelberg Township Zoning Hearing Board for 9 years. We look forward to continuing our mission of providing a camping experience, educational and other programs that build personal leadership, character and life skills while developing caring, honesty, respect and responsibility in young people, families and communities under the leadership of Mr. Grieve. The staff and volunteers of the South Mountain YMCA Camps congratulate Adrian on his new role.

Steve Bobick began his affiliation with the South Mountain YMCA Camps when he was elected to the board in 2009. He served as Vice President in 2011 and 2012 and as President in 2013 and 2014. His first exposure to Camp was in the YMCA Indian Guide program with his son in 1987. In January of 1991 Steve founded UtiliTech, Inc., a small consulting company specializing in controlling utility and telecom expenses for their clients. He sold the business in 2010 to Emmett Lien and is now semi-retired living in Robesonia with his wife Carmela.

Dr. John F. Hampson is a Founding Partner of the Wyomissing Animal Hospital and a previous 30 year board member and Past President of the South Mountain YMCA Camps. Additionally he serves on the Reading Symphony Board and is a long term member of the Conrad Weiser Rotary where he also served as a Past President.

Robyn Jones, Publisher of Berks County Living magazine, has rejoined the South Mountain YMCA Board of Directors. Jones previously served on the board from 2011 – 2014 and aided in assisting SMYMCA’s marketing and fundraising efforts. She is a current member on the Board of Pennsylvania’s Americana Region, and on the program committee for the Women2Women organization. She previously volunteered on the board of the Greater Reading Young Professionals, Children’s Alopecia Project and Northeast Berks Chamber of Commerce.

John McCloskey began his career at Alvernia University in 1994, and filled various roles ranging from an Admissions Counselor to Associate Dean of Admissions. In 2001, John switched to the Athletics Department and became the Director of Athletics and Recreation. In the summer of 2006, he was promoted to Vice President for Enroll Management, overseeing Undergraduate and Graduate & Adult Educations Divisions of Enrollment. John earned his doctorate, DBA, from Wilmington University in Delaware. He gives back to the community as a board member of The One Wish Foundation in addition to supporting other nonprofit organizations.

John McHenry is currently the Executive Vice President, Marketing and Development, Goodwill Keystone Area. His entire career in the non-profit sector has been with Goodwill. Several years ago John participated in Leadership Berks to learn more about the community. His project team worked with SMYMCA and he was later invited to join the board. His passion for the outdoors combined with service to the community through camp seemed like an excellent way to give back.

The South Mountain YMCA Camps congratulate these new board members on their nomination and election.