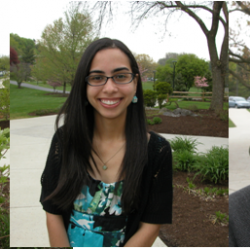 The top three graduates in the Penn State Berks spring 2017 class not only represent an outstanding depth and breadth of award-winning academic excellence, but hold a deep sense of compassion for their fellow humans and the environment, and dream of improving our world, each in their own way.

In addition, Fry received the Business Outstanding Achievement Award for this year, and Perez Camacho and Post are Schreyer Honors Scholars, which means they rank in the top five percent of Penn State University’s undergraduate student population.

Perez Camacho also received the HASS Young Investigator Award for her thesis, “Hispanic Acculturation and Advertising: An Analysis of the Use of Cultural Symbols, Language, Variations, and Models in Video Advertisements Targeting Hispanics,” as well as the 2017 Global Studies International Perspectives, and the Political Science Student of the Year and Spanish Academic Excellence Awards, both in 2016.

Adriana Perez Camacho graduated as valedictorian from Academia San Agustin y Espirito Santo high school in 2013 and decided to attend Penn State Berks because she had family in nearby New Jersey. “I liked the idea of a small setting to start and I was not sure if I would go to University Park campus after two years. I stayed. I really liked the smaller connection, especially with my professors. I know everyone in my major and made a lot of good friends. The Spanish course, Ibero-American Civilization, got me interested in other peoples’ cultures and history.”

She decided to major in Global Studies, with a Latin American Culture Option and a minor in Business. During her time at the college, she had the opportunity to study overseas three times. In the summer of 2015, she went to Buenos Aires and took Latin American business and Spanish business writing courses; in the fall of 2015, she traveled to San Jose de Cusmapa, Nicaragua for an entrepreneurial course in creativity and innovation where she worked with the nonprofit Fabretto; and this spring, she went to Switzerland, visiting the U.N. in Geneva, its High Commissioner for Refugees, the Red Cross Museum and the Swiss Parliament.

“I really liked studying abroad and my Political Science course, Globalization and its Implications. It opens your eyes to its implications and problems, but you still have hope that you can be an agent of change. I think communication is key to working on the problems of today’s world.”

In Nicaragua, Adriana said she was grateful that she had an opportunity to help teenagers develop business plans, and she is looking into other humanitarian ways in which she can help children with their education.

Perez Camacho, who was inspired by her parents, Luis and Yolanda, both educators, is on her way to working as an entry-level business analyst for a global IT outsourcing company in Virginia. She is also exploring MBA opportunities.

“I am going to miss this place, all the friends and my professors,” she said.

For Laura Post, a 2013 graduate of Blue Mountain High School, earning her degree is a great feeling and a tribute to making the most of her Penn State Berks education in the classroom, as well as through opportunities for engaged scholarship including internships, research, and presentations at professional scientific meetings.

Her passion is the environment and she is pursuing work with a consulting firm, hoping to land a job with a Maryland toxicology business she visited during one of her field trips. “I want to make a difference when it comes to our environment. I want people to think about how they want their children and grandchildren to be living 50 years from now, what the impact will be if we don’t take care of things.”

Post came to Penn State Berks after briefly considering going to the U.S. Naval Academy because her father, Jeffrey, is a Navy veteran. “I wanted a good school that was close enough for commuting, yet far enough away that I didn’t know everyone.” Her decision was made a bit easier since her mother, Beth, works for Penn State.

Among her accomplishments, Post completed full-year and summer internships with Berks International Conservation from 2014 to 2016, where she learned how to trap and band Northern Saw Whet Owls and gathered data for her honors thesis, “Distinguishing between Specialism and Opportunism in the Diet of Herring Gulls.” She has presented her paper at annual meetings of the Waterbird Society in North Carolina and the Great Lakes Area Working Group on Colonial Waterbirds in Canada.

She has also found time to work as a supplemental instructor and tutor at the college, while working at the Schuylkill Haven McDonald’s since 2012, where she is currently a shift manager, overseeing as many as 15 employees.

Post, who is getting married in June and contemplating grad school, said she, too, will miss Berks. “I appreciated the small campus, the smaller classes. All of my professors knew me by name.”

At 28, Luke Fry has covered a lot of bases. He started working summers at the age of 12 before graduating from Boyertown High School in 2007. He then enlisted in the Army as an MI Abrams tank mechanic and achieved the rank of Specialist while on active duty. He was stationed in South Korea and Georgia, and did a 12-month tour in Iraq. He then served two years in the Pennsylvania National Guard until December 2012.

In 2011, he started as a senior caregiver for the Limerick Veterinary Hospital and stayed there until September 2016, working his last two years as assistant kennel manager.

In the fall of 2013, he enrolled at Penn State Berks using his GI Bill. Being a veteran and working helped prepare him to take full advantage of the college experience. “Being older, it’s not that I don’t have distractions but I think I had a higher degree of maturity that lets me focus. I would say to myself, ‘There is no option for me to fail this test.’”

Fry immersed himself in his education and campus life. A Business major with a Marketing and Management option and a minor in Entrepreneurship and Innovation, he states, “It’s a tight knit group here. We support each other. Professors are really available and I have had strong relationships with them and have gotten plenty of help with job searches, my career and life in general. Classes in my major usually had 20 students or less. There is a lot of individual attention. It is a pretty good bargain.”

He has also devoted plenty of time to helping others, especially during his senior year. A major focus is being volunteer project coordinator for “Be Bold, Take Charge,” a joint initiative between Penn State Berks and Penn State Health St. Joseph. The goal of the initiative is improving the overall health for residents of Reading. “It is a social entrepreneurship initiative; this is very rewarding to me.”

Fry is still contemplating his next big career move, possibly enrolling in the Penn State Berks MBA program in about five years. “I haven’t set my heart on anything yet. And although my specific jobs and studies seem very different, I have found strong connections between them that will help me succeed in my next career. But I will definitely miss this place. It would be neat to come back.”