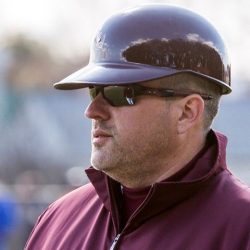 KUTZTOWN, Pa. – The Kutztown University baseball program says goodbye, and thank you to longtime assistant coach Chad Derck, who announced he is leaving the program after 13 years of service to the program and university.

Derck served two stints as a part-time coach with the Golden Bears. He served as an assistant with the program from 2003-09, and returned to the program in 2012 through 2017.

“Coach Derck was with me for 13 years,” KU head coach Chris Blum said. “It all started with a summer college baseball league as adversaries, but morphed into a great friendship. He gave me his time, his passion, lots of wins and championships, but the best thing he gave me was incredible memories.

“A special thanks to his wife for all the support through the years and sharing her husband with Kutztown baseball.”

Derck oversaw the KU hitters during his tenure, as well as assisted with game day administration, recruiting, and the recently improved strength and conditioning.

“I’m very happy to have had the opportunity to not only meet (Chad), but be able to work with him,” assistant coach Adam Schafer said. “I’m able to call him a friend, which means a lot to me. He had great passion and drive for this game and will be missed.”

Prior to Kutztown, Derck served as the head baseball coach at Shikellamy High School from 1999 to 2002.

A graduate of Susquehanna University in 1996 with a degree in psychology, Derck was a four-year letter recipient for the Crusader baseball team.