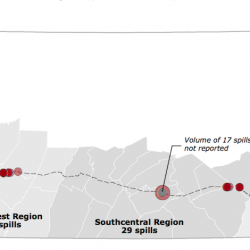 PHILADELPHIA – Environmental groups say drilling for the construction of Sunoco’s Mariner East Two pipeline has contaminated wells, and they want it stopped. Three organizations have filed papers with the Environmental Hearing Board, asking it to declare that water permits allowing horizontal, directional drilling for the natural-gas pipeline construction are not valid. According to Alex Bomstein, a lawyer with the Clean Air Council, drilling fluids have been spilled in sensitive wetlands, streams and reservoirs, and clogged or contaminated drinking-water wells.”We have documented 61 individual drilling spills in just a two-month span, and there have been several incidents of water-well contamination across the state,” he says. Sunoco calls the spills “inadvertent returns” expected during construction, and says it has complied with the containment and reporting requirements of the permits.But Bomstein contends that Pennsylvania’s Department of Environmental Protection violated its own rules when it granted Sunoco the permits.”The department is not allowed to issue permits where it is endangering water supplies, the health of streams and wetlands, and ground water,” he explains. “Nonetheless, it went ahead and issued these permits anyway.”The groups challenging the water permits are asking that drilling be halted until they can get a hearing on their request to revoke them.Bomstein says the problems they’ve found with the drilling already are greater than what has been reported, and the number of incidents continues to grow.”As people find out more, I think there’s going to be more focus on this,” he adds. “And it’s very important that people, particularly those in power, take stands to protect the public.”He says several elected officials in Delaware and Chester Counties are already calling for halting construction of the Mariner East Two pipeline.