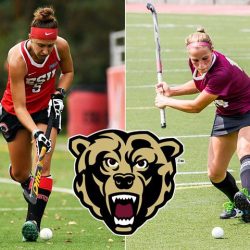 KUTZTOWN, Pa. – The Kutztown University field hockey team has added two members to its 2017 coaching staff. Morgan Firestine will join the program as an assistant coach after a career at East Stroudsburg University, while KU alum Anna Behm returns to campus as a volunteer assistant coach.

Firestine was an All-America defender at ESU. She started in 51 of her 76 career games and was a two-time All-Pennsylvania State Athletic Conference (PSAC) selection. She helped lead ESU to a PSAC and NCAA National Championship in her junior season, and a second-straight PSAC regular season title and NCAA Tournament appearance as a senior.

She is a native of Bernville, Pa., and a Tulpehocken High School graduate.

Behm was an All-America forward at KU. She put together one of the most prolific offensive seasons in KU field hockey history in her senior season of 2015 and cemented herself in the KU record books in multiple statistical categories. On the field, she was a two-time First Team All-American, the 2015 PSAC Athlete of the Year, a three-time All-PSAC First Team performer, and the LVAIAW Most Outstanding Athlete for field hockey.

Behm led the PSAC with 53 points in her senior year, 2.79 points per game, and ranked second in Division II with 1.16 goals per game (22 total). Behm was also tied for third in the PSAC with 10 assists. She ranks second all-time in KU single-season history for goals and points. Behm finished her career third in school history with 56 goals and 129 points. She also holds the school-record with 10 consecutive games with a goal. Behm was named the 2016 KU Female Senior Athlete of the Year.

Behm is a native of Kutztown, Pa., and attended Kutztown High School.