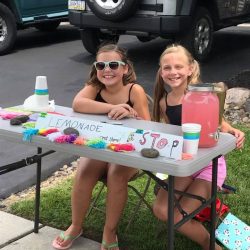 Birdsboro, PA – Franklin, an emaciated dog who was recently rescued by the Animal Rescue League (ARL) of Berks County, is visiting the ARL today to meet two young girls who hosted a lemonade and slime stand for his continued medical care.

Delany Moody, 9 years old, and Brynn Gehman, 9 years old, both from South Heidelberg Township, hosted a lemonade and homemade slime stand on Friday, July 21 after they heard about Franklin, Sally and Walton; three dogs recently rescued by the Animal Rescue League.  Moody and Gehman will present close to $300 to Franklin at the ARL.

“I applaud Delany and Brynn’s efforts and kindness to the animals,” stated Liz McCauley, Executive Director of the ARL.  “We are so thankful for their creative and fun way to help with the medical costs for the dogs.  There are so many ways to help the animals and these two young girls are great examples.”

The three dogs were found in a very fragile state after being severely neglected and abandoned by their owners.  Sally and Walton were very weak and unfortunately did not survive.  Franklin has gained 7 pounds in foster care and remains under close watch of his veterinarian.

ARL is located just outside of Reading, Pennsylvania and is the largest open admission shelter in Berks County accepting an average of 5,500 animals annually.  The shelter runs at maximum capacity throughout the year, providing adoption programs, spay/neuter clinics, community outreach, education, animal welfare investigation, and more.  The ARL’s mission is to improve all aspects of aspects of the humane treatment of animals through quality service, accommodation and education of pet owners and the community. Learn more about the ARL at www.BerksARL.org