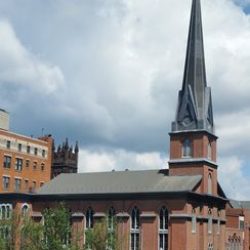 READING, PA – After 264 years at its present site, the First United Church of Christ historic building has been given to another church and its endowment has been transferred to Berks County Community Foundation so that the church’s mission can continue.

In 1752, Conrad Weiser and Isaac Levan, acting as trustees for the “Religious Society of Dutch Reformed Calvinists,” petitioned Thomas and Richard Penn, sons of William Penn, for land for the church at what eventually became known as the First UCC at 611 Washington St., Reading, Pennsylvania. The first building for worship there was a log cabin constructed in 1753.

The historic church building, completed in 1832, has now been given to Reading City Church and First UCC’s endowment of almost $800,000 has established the First United Church of Christ Fund at Berks County Community Foundation.

The occasion was marked at a reception on Thursday, August 10, at the Community Foundation.

The congregation of First UCC was facing all the problems many city churches encounter:  Dwindling and aging membership, the same people doing all the work, less attendance, and decreased giving, said Corrine Dautrich, who served as interim minister at First UCC.

After meeting with Reading City Church officials, plans began to evolve and the First UCC congregation eventually voted to give the church building to Reading City Church and to move the endowment to Berks County Community Foundation. Approval to make those moves and dissolve First UCC’s status as a nonprofit corporation was given by the Pennsylvania Attorney General’s office and Berks County Court.

The endowment at the Community Foundation will be used annually to support one or more of the following:

Programs and initiatives that benefit Berks County children, including but not limited to piano or organ lessons, summer camps, choral programs, and language classes. Funding will help children whose families would not otherwise be able to afford to participate.Programs and initiatives that benefit Berks County senior citizens.Programs and initiatives that reduce hunger in Berks County.Ministry and outreach or the establishment of new churches for United Church of Christ congregations in Berks County.Organ and piano tuning, building maintenance, or ministry and outreach for the Reading City Church parish at 611 Washington St.The First UCC Senior Center, which has existed for more than 30 years and will continue at St. Peter’s UCC in Spring Township, where some former First UCC members collaborate with St. Peter’s members to serve meals at Opportunity House once a month.