Amish Shed Builder to Move to a New Location, Emotions Mixed as They Leave the Family Farm 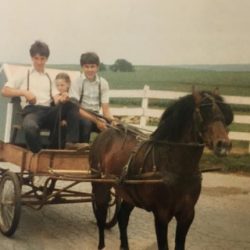 An Amish Shed and Amish Garage Builder in Lancaster County, PA, will soon leave the fourth generation family farm for a new location.

Gap, PA – ​There is a sense of loss as Sheds Unlimited prepares to exit the family farm in Gap, PA to move their manufacturing facility about 15 miles north to Morgantown. For nearly 25 years, the growing Sheds Unlimited team has enjoyed working on the fourth generation family farm situated in the heart of Lancaster County’s Amish country.  But growth in demand, increasing customization of sheds and garages and a desire to serve clients’ needs in a more timely manner required the move to a new location.

Sheds Unlimited was born on the family farm when Stephen Stoltzfus Sr needed extra work for his five growing sons. Coming from the Amish-Mennonite tradition where hard work and manual labor are highly valued, Stephen wanted his children to learn to work with their hands alongside him at home.

Manufacturing storage sheds was not the first thing the family crafted on the farm. The story, as outlined on the Sheds Unlimited website, tells how the oldest sons began building dog boxes on the farm even before they could drive a car! They used a pony and homemade cart to transport materials to the farm. The young sons, along with their father, built dog boxes and delivered them via the pony cart to a nearby shed business to be sold.

It wasn’t long before they began building a few storage sheds on the second floor of the dairy barn and in a small outbuilding on the farm. Unfortunately, the township was not overly fond of the idea of building sheds and garages on a farm in the middle of rural Lancaster County was outside the local zoning ordinances.

Due to these difficulties, the developing shed business moved nine miles from the farm to Honey Brook and set up in Uncle Ivan’s old tobacco shed. There, the company offered garages and sheds for sale direct to consumers and a few select dealers. But after a few years, the mood began to shift back in the hometown.

Salisbury Township in Lancaster County was still very farm centered at the time. But more and more farmers were in need of extra income to support their farming operations and were pushing for changes in the zoning to set up small business ventures. Stephen Sr tells of going to the meeting where the town was asking for ideas. He stood up in that meeting and asked for 4,000 square foot of manufacturing space on the farm. It wasn’t long before the zoning ordinances changed for Salisbury Township farmers, and Stephen received permission for what he had requested.

The Stoltzfus family was soon hard at work building a shed manufacturing facility on the farm. The launch of this next phase of building Amish sheds and Amish Garages was a welcome transition. And even though times were still tough and the dairy farm faced an uncertain future, the family could now wake up in the morning, milk the cows and then head to work in the storage shed facility right there on the farm.

Initially, the shed business was an extra income to support life on the struggling farm. Milk prices fluctuated up and down, and when prices were low, keeping the cows meant taking funds from the shed business to maintain the dairy farm. It was a somber day when, after much deliberation as a family, large cattle trucks hauled off the herd of cows that had been a part of family life since they moved to the farm in 1976.

Growth in shed and car garage sales grew steadily after the cows left the farm. But It was the launch into online marketing that substantially changed the direction of the company. During the economic downturn, Chris (the middle son who now owns E-Impact Marketing and manages the Sheds Unlimited internet marketing), decided to build a small website to promote sheds and garages online. To everyone’s surprise, dozens of garages and sheds began selling through internet leads.

“Almost immediately, we started making sales through online leads,” says Chris,“ and we have continued to grow in the online market ever since.” When the second son, Steve Stoltzfus Jr returned from an eleven-year stint working with Christian Aid Ministries in Romania, he took over the helm of running the business and Chris focused on the online marketing program.

The team work paid off, and the company saw double digit growth year over year for nearly ten years. During that time, the Amish Shed company went from a handful of local Amish and Mennonite employees building simple buildings to a team of more than 30 people building complex shed and garage designs which can take several days to complete.

Amish built garages also became an option for customers who found the farm based shed company online. Detached and prefab one, two, three and four car garages continued to expand into more complex designs including attic garages, luxury garages, garages with lift space and garages with apartment space. Every week, their broad range of shed and garage collections are viewed by thousands of visitors on their website.

Consistent growth in the Sheds Unlimited line of products and increased customization of those buildings have inspired the big move that is just around the corner. As of writing, the owners are eagerly waiting for the occupancy permit that will officially launch the move to their new facility in Morgantown.

While the Stoltzfus family is grateful for the new direction, there is a keen awareness of a new chapter that is beginning for Sheds Unlimited. Some in the family feel a sense of loss as the hustle and bustle of trucks, tow motors and employees prepare to leave the family farm which is now home to Stephen Stoltzfus Sr’s grandchildren…the fifth generation to live on the homestead.