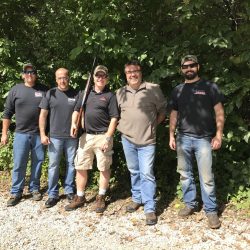 Fleetwood PA – DESCCO Design & Construction, Inc. hosted its 13th Annual Dwight E. Stoltzfus Memorial Trade Scholarship Event on Friday, September 8, 2017 at M&E Sporting Clays in Hamburg, PA. All proceeds from the Sporting Clays Shoot benefit an endowed scholarship at Pennsylvania College of Technology. The scholarship has been established in memory of Dwight E. Stoltzfus, founder of DESCCO Design & Construction, Inc. The purpose is to aid and encourage a young person to pursue further education in the trades. “Dwight held in high regard people that worked with their hands,” said Kay Stoltzfus of her late husband. “This scholarship is an appropriate way to imprint his standard of quality on the building trades that will last for generations to come.”

Dwight read a passage from a book called Working that said, “The architect draws the picture and the plans, and the draftsman and the engineer, they help him. They figure the strength and so on. But when it comes to actually makin’ the curves and doin’ the work, you’ve got to do it with your hands. It comes right back to your hands.” This quotation resonated with him deeply and out of that belief, the Memorial Trade Scholarship was created in his honor.

Over the past 12 years, $79,525.87 has been contributed to the endowed scholarship fund. This year’s Sporting Clays Classic raised more than any year prior with a total of $11,000.00 to be contributed to the scholarship. These contributions are providing at least two scholarships annually to students of Pennsylvania College of Technology who are pursuing a career in the trades.

“Every day I have the pleasure of working with smart and talented men and women who love to build and create new environments. This is meaningful work as there are countless opportunities in the trades. Our scholarship was created to help those who are driven to build rewarding careers.” Says Nicholas Stoltzfus – President of DESCCO Design & Construction.