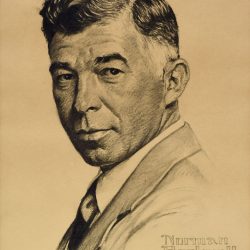 Drawing to be unveiled at private ceremony

READING, PA — A local resident has generously pledged to donate a graphite and charcoal drawing by renowned American artist and illustrator Norman Rockwell to the Reading Public Museum. The drawing is a charcoal portrait of the donor’s father, Lee Bausher, and was a Christmas gift to Bausher’s wife in the 1950s. Bausher was a prominent Reading industrialist who lived in “PennCrest” mansion on Hill Road. The drawing will be unveiled at a private museum ceremony at PennCrest on November 7.  Along with the drawing, the donation also includes a personal note penned by the artist himself.

Following the ceremony, the drawing will be on view for the public in The Museum’s American Gallery through the end of the year. The drawing will then return to the donor, who will keep it until her death.

Scott Schweigert, curator of art at The Museum remarked that “the gift is particularly meaningful to the Reading Public Museum, because it was commissioned by one of the city’s important citizens, who greatly admired the artist’s work. The drawing will join a preparatory oil study for a Saturday Evening Post cover also part of The Museum’s collection. The new donation will allow RPM to present different aspects of Rockwell’s creative process.”

Norman Rockwell, one of America’s most beloved artists, is best known for his works on The Saturday Evening Post, illustrating the magazine’s covers for more than four decades, and the Four Freedoms series which he created in support of the United States’ efforts in World War II.