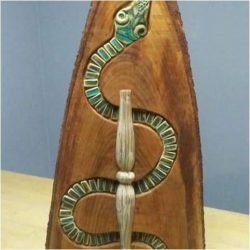 I first met Pedro Quintero and Maria Esther Galban ten years ago when I was a journalist writing for yachting magazines.  While in Venezuela, I heard of this wonderful potter, Maria Galban, who lived in a beautiful space called Magic Mountain located in the small village of Los Altos de Santa Fe – bordering on the Caribbean Sea. I arranged to visit her studio TAI, which means clay in the Wayuü native language and is also an Oriental concept that translates into “Internal energy that flows”.

It is Maria’s relationship with the sea that provides the focus and inspiration for many of her designs and sculptures – either in clay as ceramics and pottery – or in jewelry as beautiful glass and enamel earrings and necklaces.  One of her most outstanding – a 12 foot Iguana that resided outside of her studio – was created in four castings,.

In Venezuela, Maria had three wheels – a kick wheel, a David Leach wheel and an electric wheel – the kick wheel was her favorite.  She also had three kilns for ceramics – an electric kiln, that fires earthenware to bisque at 900 Centigrade, and two kilns using propane gas that fire up to 1,280 Centigrade.  She normally fired over 50 items at a time, of normal size, selling to the many yachtspeople who were cruising the islands of Venezuela.

In the mid 70s Maria studied at the University of Zulia, in the western part of Venezuela, a bilingual pre-school, with children of the Wayuü Indian ethnic group, which is where she began her love affair with ceramics. She then moved to Caracas where she continued her studies in ceramics with Carlos Runcie Tanaka, Maruja Herrera, Michael Mason and Randy Johnston – all internationally known in their fields.  She studied Rakú with David Norton and utilitarian ceramics with David Leach & Warren McKenzie.  She also studied Art and Ceramics in the Julio Arraga School of Maracaibo, the Cristobal Rojas School in Caracas, the School Fine Arts in Caracas and the Institute of Design and was a member of the Venezuelan Association for Fire Arts.  Exhibiting her ceramics in the early 80s, Maria developed quite a following and has had many exhibitions of her work both in Venezuela and internationally.

“The strong influence of such master potters as Leach, Mc Kenzie, Norton, Tanaka, and many more that  traveled to Venezuela, left an imprint in the work of many potters in the 80’s and 90’s. We inherited their aesthetics, glazes, techniques and high temperature (cone 10) and the magical results of traditional ways of firing,” she tells me.

Maria and Pedro have been friends since 1988; Pedro is also an artist who works in different mediums like wood, photography, found object jewelry, environmental art and clay. After obtaining two university degrees, one in economics and the other in ecology, he decides his passion is creating. He has participated in many Ceramic Art Shows obtaining multiple awards. Throughout his career as an artist has had solo shows in several important Venezuelan Museums and Art Galleries.  Pedro’s love of nature and found objects has permitted him to intervene with his magical clay snakes, slab wood, windows, stairs, doors, floors, walls and whatever comes across.  Maria and Pedro decided to join talents, both as man and wife and as artists – creating together, sharing time in the studio, the selection of clays and creating and nourishing of each other’s works, while being leaders in the artistic community of the area.

During the following years, TAI continued producing high quality pottery. But then, suddenly everything collapsed. “Venezuela was devoured by an ideology that brought shortage, destruction, sadness, hunger and fear. Our souls were diminished and we found that we could not create anymore. It was time for a change” Maria tells me.

With a broken and divided heart and their minds filled with uncertainties they sadly packed their luggage and headed for the United States in 2016.  Due to immigration requirements they had to split; Pedro went to Florida to help his daughter and Maria traveled to California to stay with her daughter, Marines (an interior designer) and her family. Having a University degree in Education Maria found a chance to teach ceramics in an immersion Spanish School called Rayuela.

She continues, “I was so happy, I felt blessed to touch clay again. It was hard to be separated but necessary. During the next 8 months we knew our moment would come through. The moment arrived when the Coy family in Barto, Pa offered us a stall in their 1800 century barn, so the tropical spacious (1400 sq/ft) workshop in Venezuela was transformed into a (170 sq/ft) cozy, warm and beautiful stone wall studio with all the majestic spirits of horses that lived there in the past. We were inspired by their intuition and strength.  With our bare hands, we started to build our new life.

TAI was transformed into BAREHANDS. The law of attraction started to activate. Clay on Main, an art center in Oley, Pa, owned by Dolores Kirschner, offered them the opportunity to use their facilities researching on how to switch from cone 10 reduction firing glazes to cone 6 electric. Slowly things were looking up.

“Friend, Clarissa McPeck, offered to bring our pottery wheel from Venezuela with her family owned courier. Pedro’s sister presented us with an electric kiln. Another ray of light was visiting David Norton, at Potterosa, Virginia, a great potter and friend who came to Venezuela in the 90’s. I had the privilege to learn from him. David and his wife Brenda’s generosity, wisdom and solidarity, gave us essential tools for our BAREHANDS.

The environment in Pennsylvania has been essential in experiencing pit firing and raku, techniques that remind us of the joy, bliss, pleasure, surprise of clay and the magic of fire.  We are now creating and selling from BAREHANDS where we have gone back to basics, to simplicity and reinventing ourselves, with passion and confidence in life and the experience of living in America.”

Editor’s Note: Works by Pedro and Maria can be seen locally at Studio B, Boyertown, displayed in a current exhibit.