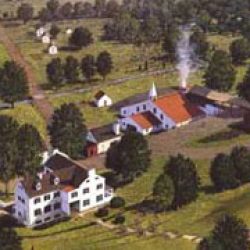 Larry Ward will bring to life his research on Mouns Jones who was a licensed Indian Trader along with others who traded with 18th century Native Americans.  Published author along with Stephen Kindig of the Atlas of  Drawings of Structures Preserved by the Historic Preservation Trust of Berks County [2008], Ward has served as director and vice president of the HPTC.  He continues to serve actively on the HPTC Board of Directors. He is a known bookseller, heading up Museum Books, LLC. He practiced law in Berks County from 1968-1997 and holds a Bachelor of Science in Physics from Providence [RI] College and a Juris Doctorate from Georgetown University.

Native to the Schuylkill Highlands are the Lenni Lenape or Delaware Indians.  They were a loose confederation of Algonkian bands, which at the opening of the 17th century occupied a continuous territory from the Delaware Bay to the Blue Mountain Ridge, including today’s Hopewell Furnace National Historic Site.  A prominent feature of the park is the Lenape Trail, a 5.5 mile trail that runs through Hopewell Furnace and neighboring French Creek State Park. See Area Features Map.

While at Hopewell Furnace National Historic Site visitors are encouraged to go into the village, tour the buildings, see Hopewell’s water wheel and learn about iron making and why Hopewell Furnace is important to our nation’s history.  Open 9 a.m. to 5 p.m., the park is located five miles south of Birdsboro, PA, off  Route 345. For more information visit www.friendsofhopewellfurn.org.